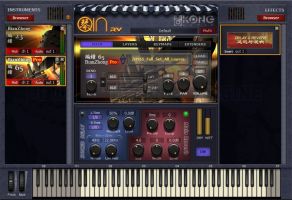 The ZengHouY Bian Zhong Chime-bells set is the most complete and immense set of ancient Chinese Chime-bells ever discovered, and it revealed the lost oval design of "one bell with two tones." It also goes beyond the Pentatonic Scale and is only one octave less than the modern piano.

This set of Bian Zhong is one of the official national treasures of China. Now the composers in the world have the chance to use in their compositions the same Chime-bells that were played in the courts of kings in the early days of Chinese civilization.

Marquis Yi's Bian Zhong is the most exquisite musical national treasure of China. With its excavation in 1978 from the tomb of Marquis Yi of Zeng, Yi's Chime Bells astounded the world with its perfect condition and the extraordinary insight it shined upon ancient Chinese civilization. Based on the Bell set's inscriptions, the date of the Chime Bell set was around 433 BC, during the Zhou dynasty's Autumn And Spring/Warring States periods. Based on the paintings excavated from the same tomb, we know hammers and sticks were used for striking the bells.

Bian Zhong was prevalent in the feudal Zhou dynasty's different levels of states' courts. Music was connected with ritual and state power back then, and such a sophisticated instrument like Bian Zhong could only be accessible for the lords.

The bronze Bian Zhong is constituted of a set of 65 bronze chime-bells (including the one given by the king of Chu) mounted at three levels on a wooden frame and divided into eight groups. Due to the bell's conclave/roof tile-shape, each bell can generate two different pitches by striking the center or on the side. The interval between the two notes is either a major or minor third.

Now Kong Audio has captured and recreated the sound from 2,400 years ago, and made it available to you at your fingertips.