Blood Bucket by Insert Piz Here is a Virtual Instrument Audio Plugin. It functions as a VST Plugin. 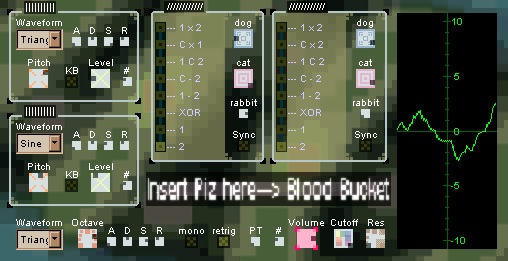 Blood Bucket is apparently a pointless experiment in synthetic stupidity. Two oscillators are combined in a variety of ways to modulate a third oscillator and presets are named after parts of the human head.

Bloodbucket is a strange little critter to deal with. It has some nice sounds but it looks more or less like a test project thrown together without any consequential design in mind.

When loading it into the host it appears like a semibad user interface with poor drawn features, knobs are basically a white square with a direction marker in it. The synth seam to be designed with alot of haste in it since there are no consequential labeling of the knobs, but rather the classic SynthEdit tooltip names. The controls looks like they've been drawn in Paint or Photoshop and they don't look too well.

The sounds are really experimental and has some nice electronica feeling to it, not likely the synth you'll go for when it comes to good strings or other instruments, but it is more for synthetic sounds á la Kraftwerk.

The synth has the basic synthedit waveforms and a simple modulation matrix for modulating the two oscilators. You have 3 envelopes controling different aspects of the sound. The matrix modulation has 3 knobs named Dog, Cat and Rabbit that controls the 2 onboard LFO depths.
Automation wise this the synth is pure hell to work with since many parameters are named the same, you don't know what decay parameter you're about to tweak, so it's some gamble when working with it.

None to talk about.

The synth has 16 mediocre patches named after the heads organs, yet another sign of how hasty this plugin was created.

Email on its site.

This is freeware, and the synth should remain so. I can't see a valid reason why someone would pay for it.

Same stability that is known from SynthEdit plugins.

This synth is really booring and it should have had some more time put down into it. It is yet another experimental synthesizer that is granted a place in my allready overcrowded Test folder.

Average user rating of 1.00 from 1 review