Brainworx bx_rockrack PRO by Plugin Alliance is a Virtual Effect Audio Plugin. It functions as a VST Plugin, an Audio Units Plugin, a VST 3 Plugin, an RTAS Plugin and an AAX Plugin. 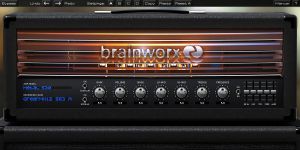 Award-winning guitar amp plugin like no other. Offering complete "recording chains" of 2 world-class studios in LA and Germany!

The Brainworx team, renowned for their 1:1-emulations of even the most expensive hi-end audio gear, have taken a new approach on guitar amp plugins. Most amp sims out there pretend to simulate 112 amps and 256 microphones, and then you can tweak them as long as you want and still don't get the sound they all promise. Most of the times the distortion sounds all sound the same, and not great at all.

BX give you just a few (perfectly) modeled tube-amps, and the way they have captured COMPLETE recording chains in some of the best equipped studios with the help of very experienced engineers is simply revolutionary. Select your favorite speaker / recording chain, choose your amp, tweak the gain and EQ settings, and there you go.

World-class guitar sounds, recallable and reliable. If you have ever tried to record the same identical amp in the same studio twice and ended up frustrated because the results just were NOT the same in the end you know what we are talking about.

PRO Version:
The new PRO version has 7 amps now - including the 2 brand new JAZZ amps. And BX have much improved the noise gate.