Cookin - Additive Synthesis by tschery is a Virtual Instrument Audio Plugin for Windows. It functions as a VST Plugin. 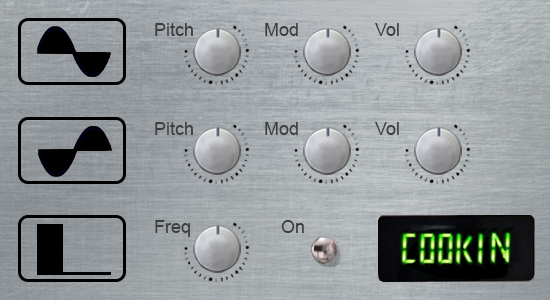 Cookin is a free additive synthesizer VST, that comes with 8 different presets. The sounds range from 8bit-ish stabs to nice pads. In the near future I will upload the source code as well, for those who are interested.

Easy to use and understand. It does have limits that become clear after using it, as well I've found a bug and two issues that you might have while using it.

Starting with the Usage, it produces very nice pseudo retro sounds. Each of the modulators effect the other oscillator respectively and you need not have the volume turned on from an oscillator that's only modulating if you so choose. The presets give you clear definitions of the types of sounds you can produce.
I can easily recommend this if you need something to make pseudo retro game soundtracks with.

Next looking at Limits, it is very clear what Cookin can do in its standalone form:

The one major Bug that I found is if you rapidly move or agitate a knob the VST will cause the process it is running on to stop responding. In my experience it mostly only happens with the modulation knobs. If available in your DAW I recommend saving often as well as loading up Cookin in a bridged process so that if you come across this bug you can manually exit the bridged process using a Task Manager without crashing your DAW.

Last but not least here are some Issues you may come across. Sometimes a low frequency sound is produced below 20Hz, I've found that this is typically caused by the modulation knobs and can be produced even if the VST is not playing any sound. I recommend using a High Pass filter from inside your DAW rather than the one available inside Cookin to resolve this issue.

This last one may be just a personal gripe. The Cookin image that flashes in the corner of the VST puts out a Value Change indication and my DAW picks it up as a Manual Value Change. The only real issue this caused for me personally was not being able to view specific numeric values of anything that I put my cursor over. I unfortunately do not have a good workaround for this.

Last Words, after using it for 5 hours, I've got to say it is worth using. If you want to download and use it I highly recommend purposefully trying to run the Bug that I mentioned so you can learn how much agitation is actually needed before it Freezes. After this you know what to expect if you're going to automate anything and should prevent you from accidentally running into it later on.