CP Electric Grand by UVI is a Virtual Instrument Audio Plugin and Soundware (e.g. samples or presets that load into other products). It includes, and is therefore "powered by", UVI Workstation, which functions as a VST Plugin, an Audio Units Plugin and an AAX Plugin. 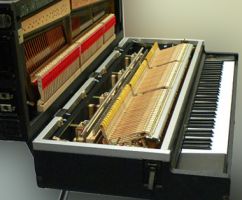 During the 1970s and 1980s, some manufacturers did experiment a particular type of piano called "Electric Grand Piano".

Unlike a digital piano, an electric grand has hammers and strings like a real acoustic. What makes it sound so unique is its way of amplification, carried by pickups under every string (similar to how an electric guitar operates).

In this UVI Soundpack we bring you the Rolls of this kind of instruments : the Yamaha CP80 (same model as the CP70 with an extended range), deeply multi-sampled with up to 10 velocities by key and release samples.

As for all our high quality samples, we did use the best high-end analog Direct Box as well as the best Analog to digital converters. The result is an ultra realistic reproduction of the original instruments used by renowned artists like Phil Collins, The Edge of U2, Tony Banks (Genesis), Jeff Lorber and lots of Latin music keyboardists.