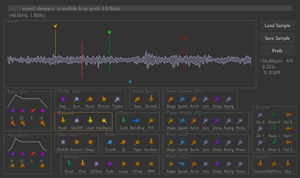 You can control how the sample is looped as it is played. An adjustable amount of crossfade can be applied to the loop endpoints to smooth the transitions. This makes it extremely easy to produce glitch-free pad sounds. The loops can also be played backwards and alternately forwards and backwards (pendulum-style).

Further sound processing can be applied in the form of overdrive/saturation, filtering, envelopes (for amplitude and filter), pulse-width modulation, oscillator sync and LFOs (one each for filter, pitch, PWM and sync).

The synth is 32 note polyphonic, and all parameters can be controlled by MIDI controllers.

You can record continuously, even while playing back. This allows you to use the plugin as an extremely unusual and creative delay effect. For example you can have the delays played back at double the pitch/speed you played them. Or at double the pitch and backwards. Or as a chord. Or repeat the first beat of every bar... the possibilities are legion.

You can save the recorded sample to disk as an AIFF file for later use.

Crossfade Loop Synth by Expert Sleepers is a simple, yet powerful plugin that fills a HUGE void in electronic music production — basic sample playback! When I'm inspired, I like to work fast before my muse leaves me. Most of today's virtual samplers are so stuffed with features and menus that it's nearly impossible to load, tweak, and then play an audio file. Crossfade Loop Synth comes to the rescue. With this plugin, you can quickly load a WAV or AIFF, apply crossfade to the loop endpoints to smooth out the transitions, and then manipulate the sample with: overdrive, saturation, filtering, amplitude, filter, modulation, LFOs, reverse, etc.


MISSING FEATURES: The main point of this plugin is to provide a straightforward alternative. So, adding too many features would complicate things and destroy the concept, i.e., time stretching, granular synthesis, etc. Yet, audio file drag n' drop would be nicer than the browser.

Crossfade Loopsynth is a vsti/AU that will let you load a single .wav or .aiff into its interface so you can play it like a pitched instrument.