Cult Sampler by Best Service is a Virtual Instrument Audio Plugin and Soundware (e.g. samples or presets that load into other products). It includes, and is therefore "powered by", Kompakt, which functions as a VST Plugin, an Audio Units Plugin, a DirectX Plugin and an RTAS Plugin. 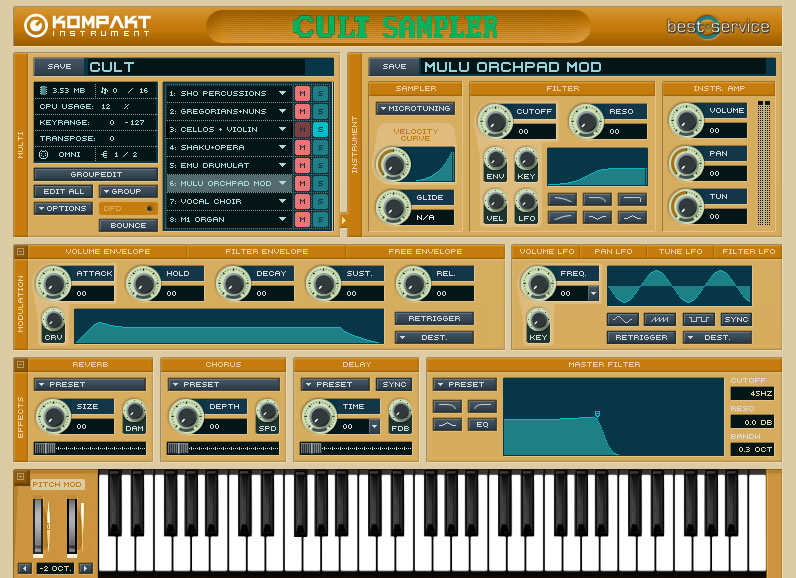 This product is "Powered By" Kompakt. The OS and Format icons listed below should be accurate for the latest version of Kompakt.
Plug-in, App & Soundware Format(s)
Operating System Availability
Miscellaneous Information

Cult Sampler is a Native Instruments Kompakt based plugin instrument.

This library includes the sounds of the late 70s to the early 80s. Because the samplers at that time suffered from severe limitations in memory capacity (RAM), excess artistic high level sound programming was a must. Pitching and stretching of sounds was obligatory and 8 bit sounds were mostly the standard. This resulted in sounds with very special character. A character that nowadays is missing in our hyper-clean 24 bit / 96 kHz world of almost unlimited RAM.

The 2000 sounds and multi-samples are perfectly laid out to play on your keyboard. Sounds of early vintage samplers like Orchestron, EMU II, Akai S-612, Ensoniq Mirage, Fairlight, Synclavier, Linn, Mellotron, Master Studio Coll., FZ-1, DSS-1. Each sound and multi-sample was produced on a highly professional level with the original samplers. Also on board are all these classic factory sounds.

The sound library can be loaded into NI's Kontakt.

This library can be used in Kontakt / Kontakt Player 4 or higher by "adding" to Kontakt's Library Tab. You will have the sounds available, but no GUI any more.

I was hoping to be able to recreate a lot of the tracks from my youth with Cult Sampler, but unfortunately the rather spotty and oftentimes perplexing choice of sounds included makes that difficult or impossible. Despite the fact that the cover art on the box is based on the Fairlight, there are only a meager 20 Fairlight samples included. Other classics like the Synclavier are also poorly represented.

There is a strange emphasis on orchestral samples. Strange because most of these samples are short and low-res (8 or 12 bit). I can't imagine anybody these days is desperately looking for the Akai S1000 stock violin patch! On the other hand, this would have been a great opportunity to bring back some of the more off the wall sounds of the 1980's.

The classic drum machine section is convenient and usable, but most of these sounds have been well covered in the past. I would have liked to hear some of the weirder drum sounds from various sample libraries, but they are not to be found.

Speaking of drum kits, due to the Kompakt player limitations, you cannot route individual drum hits to separate outs. You'll have to spring for the full version of Kontakt 1.5 to do that.

So far I've only touched on the negatives, but it's not all bad news. What you do get is laid out well, and the Kompakt player format means that the sounds load up quickly and work without fuss. You can get right down to making tracks with this instrument. The Native Instruments web based Challenge/Response system is a love it or hate it affair, but it worked quickly and trouble-free for me.

To sum it up, it's a decent collection of vintage sounds which leans a little too heavily towards ordinary fare like organ, piano, and strings, and not enough towards the weirder artifacts of the 80's for my taste. Don't get this thinking you're getting a massive Fairlight or Synclavier library. It's no doubt useful if you're looking to add a touch of 80's quirk to your music, but it could have been so much more.Read more

Having used a lot of the vintage units represented by this collection, I was very excited to see this released, and got it as soon as it was available. After a few weeks with it, I have to say that while it is very good, there are some mysterious omissions that weakens the collection.

First: The Kompakt engine is very good, and runs well in Logic on my Mac. It has a very small memory footprint (the samples are all pretty small - programs are between 1-6 meg each given the miniscule source samples).

Second: The samples are VERY well recorded, and background hiss has been removed. On some of the Mirage samples, it's actually distracting to have it sound so clean. The Fairlight RRR sound is glorious (you'll be doing "moments in love" all afternoon).

Now my problems: There are some instruments completely missing: The PPG Waveterm library would have been perfect for those of us who grew up with Frankie and Propaganda. Linndrum and Linndrum2s are missing, though the Linn 9000 is still there. There are no Emax1 or EmulatorII samples either (the EMUII they reference is an EMAX2, plus an Emulator3, both 16-bit, ugh!), so some trademark sounds like the Sledgehammer Shakuhachi aren't there... I could go on.

Issue 2: There are omissions WITHIN the represented libraries: While the RX5 drummachine set includes samples from 2 of the optional Wave cartridges, the R8 set is just the stock machine. The Fairlight factory library is 40 disks yet only 20 programs are represented, missing some of the big trademark sounds heard on Duran's Seven and the Ragged Tiger or Heaven 17 Luxury Gap albums. Nor did they include the "Art of Noise" drums, which almost every Fairlight owner had a copy of.

Issue 3: The final has to do with the Kompakt engine iteself: One of the charms of these old samplers is the aliasing grunge you get from overtransposing a sample. If you tune down any of THESE programs, it sounds too damn good. Some of the sounds on NIN's first album were factory EMAX sounds pitched 2-3 octaves too low with screechy results. You don't get that capability with this library. Not that the Linn1 was included, but the When Doves Cry detuned rimshot with isn't possible with this library.

So in conclusion, it is very nice to have some of these sounds in a low-impact, efficient library. But to live up to the billing of the "Retro VSTi" they should have been more complete in their selection of instruments, more complete in the libraries represented for each instrument, and more grungily authentic in the playback mechanism.

The Manual only covers Kompakt: There is a one page note about the library itself, which is nowhere near enough.

So I do recommend it, but I wish so much it could have been more. I was REALLY looking forward to this, and I think it is a real missed opportunity.