Daedalus by Omnitaur is a Virtual Instrument Audio Plugin. It functions as a VST Plugin. 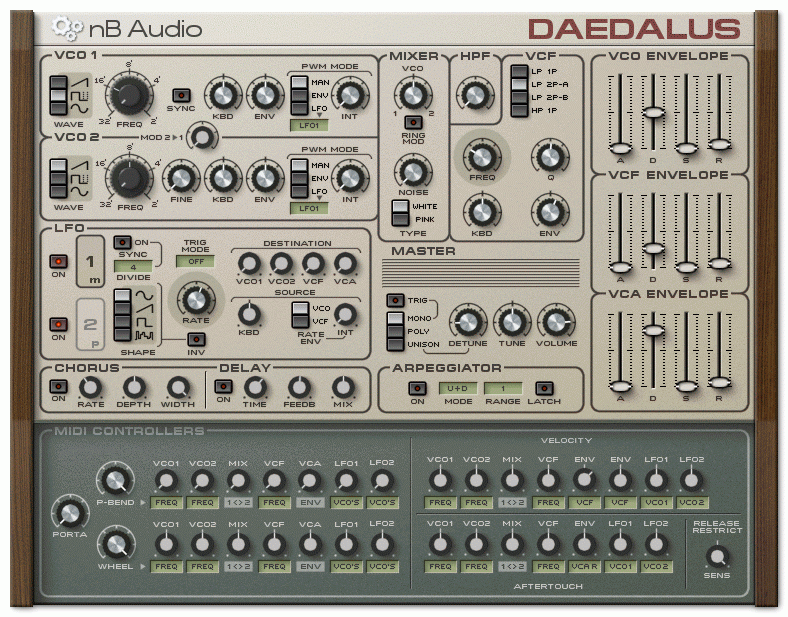 Daedalus is a polyphonic synthesizer with special attention paid to MIDI controls such as Pitch Bend, Modulation Wheel, Velocity and Aftertouch. It has been developed for the performing musician in mind.

USER INTERFACE
Nicely done UI. You can easily tell what everything does, and it's nice to look at.

SOUND
Well, it sounds like a VA. A good VA, at that. The filters sound solid, and with the modulation options its easy to create interesting sounds. Daedalus operates something of a middle ground between really innovative, complicated digital synths that don't even try to mimic analogs, and outright emulations that try their best to recapture classic sounds. This can be a little tiring - at times the synth seems a little bit bland, but its polished sound manages to pull it ahead of the legions of other similar synths out there. It sounds crisp, clear, and nonetheless also thick.

FEATURES
Basically, you've got two oscillators, two filters that you can route to essentially whatever you want. There's also ring modulation, oscillator sync, chorus, delay, and an arpeggiator, all of which work nicely if not incredibly. However, this is one case where the whole is greater than the sum of the parts. In combination, these parts make a synth that can create a very nice range of very solid sounds. It may not become the impossible-to-replace core of your synth setup, but it will prove a solid addition to any arsenal.

PRESETS
Decent, but there are very few of them and they don't really show the possibilities the synth has - in fairness, though, I'm reviewing the free version. From what I understand, the enhanced version, available for a modest donation, has many more presets.Read more

Can a €39 strings library be ‘the only solo violin sample library you’ll ever need'?by Tj Shredder @ 16:32 in Samplers, Sampling & Sample Libraries

How much does the color/ finish of a guitar matter to you?by kelldammit @ 16:28 in Guitars

Continue this sentence with song lyricsby DMG68 @ 16:05 in Off Topic ClassicsView All Latest Posts