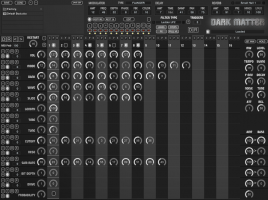 Dark Matter is an Advanced Loop Re-Sequencer which works with tempo synced Loops in a variety of ways. It has 13 Sequencer Rows and uses 889 loops across 7 Banks at it's core which includes Synth Sequences, Morphing Sounds, Radio Sounds, Drum Hits and Loops. Sections of any of these can be selected on each step using the Slice Sequencer which allows and of 16 start points to be chosen. There are also 22 modes for each bank that include things such as LFO Chops and reverse modes.

A Guide to some of the features: