DSK OranZe by DSK Music is a Virtual Instrument Audio Plugin. It functions as a VST Plugin. 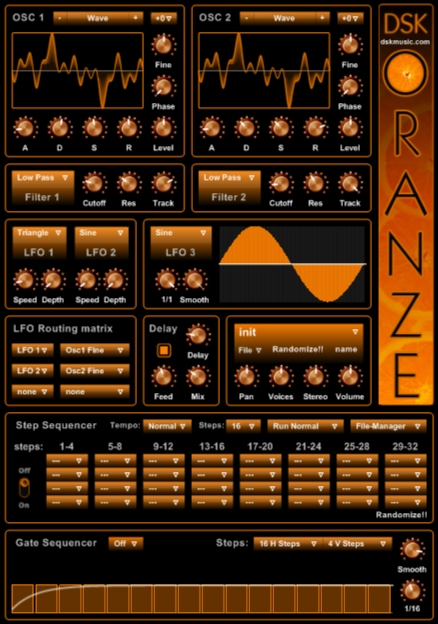 DSK OranZe is described as an "Experimental Synth".

DSK OranZe is described as an "Experimental Synth", but it can give some experimental sounds, but also some real feel-good sounds also. Great for elecronic piano sounds, like in some french new wave pop tune. You get a basic sound from two OSC filters with a bunch of preset waves, after this just tweak. It has a third waveform that can be applied to different effectors.

I like this VST not because it is simple, which it is, but you get a great sound from it that can be easy to tweak. And you can route those waveforms to different effects.

But this VST also has a big 32 step seqencer that will put most Arp's to bed, which can be altered to a 1 step sequencer and every thing inbetween. But on top of this it has a Gate Sequencer of 16 step, apply the gate ontop of the step, and you have some crazy stuff happening. Also a subtle delay filter is on the surface, Velocity response and a handy randonize button for thinking outside the box

User Interface: Simple and original.
Sound: Not going to be on every track, but you will use it.
Features: To the point, but better features than other costly VSTi.
Docs: none, but you don't need any - RTFM, no way!
Presets: Small set, but all that is needed for a tweaking base start.
Support: DSK, support you.
Value: Donationware, but you'll pay for this.
Stability: Never crashes, but have a few problems with selecting settings, I'm such this is a Vista/DAW problem.Read more