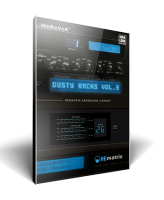 500 IRs from six legendary reverberation units into a single library

STUDIO REVERBS FROM THE '80S AND '90S CLASSICS.

There were a huge number of reverb processors created in the '80s and '90s: most of them are practically unknown, even though they sounded really interesting. For those reasons they are valuable tools for achieving unique sounds today.

Dusty Racks Vol. 3 has been created by capturing 6 of the most unique units:

IRs have been recorded using Neve and SSL preamps, and carefully edited all of the impulses to ensure they were consistent throughout the entire library.

A collection of 500 IRs and 200 individual presets.

The impulses are divided into two banks: one bank made with single IR presets, designed to replicate the original vibe, and a second multi-layer bank where the presets combine two or more IRs from different units layered together, extending the tonal palette and creating some really unprecedented reverb spaces.