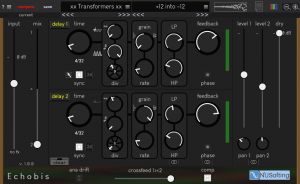 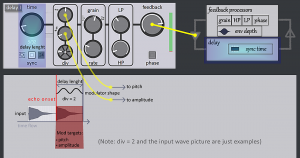 Echobis: a poly-rhythmic and granular tool based on two echo/delay lines

Overview: The two delay-lines can be mixed, panned, cross-feeded. And each of them allows very quick setting of many tempo divisions. Polyrhythmic echoes have never been so easy.

Available as 64-bit AU and VST2 plug-in: Mac(native M1 and intel) and Windows(intel).

Here is the "intro" video, fully dedicated to beat manipulation:
{See video at top of page}

No copy-protection: Buy it once and you can do what you want* with it. (*on the computers your personally own).

I have a lot of delay effects and I was a skeptical about getting another one. This one is different, and more importantly - sounds differently.

Unique, inventive and inspiring. Those words go with virtually everything from NuSofting and again they have to be mentioned! I've had the pleasure of working with the betas of it earlier, which already promised great things and now they've been delivered! Echobis is like an extra synth on top of any sound source and allow you to create completely new and exciting kinds of elements you just can't get any other way. And it does so easily, inviting you to explore without any confusion, even as you would expect some. But, no, quickly you know your way around, but there's no end to the depth of manipulation. At the same time it happens to double as a friendly to use, harmless echo. Yet, it's unlikely you'll settle with harmless.

From the bottom of my heart, I can recommend it. With NuSofting a unique musician creates tools that are unique and understated works of art, luring you into rare spaces to discover in your own musical impulses. I would call this a "foolish- to- miss" kind of tool in your arsenal. I'm happy it's in mine and it's there to stay.