for owners of Emotional Violin or Viola 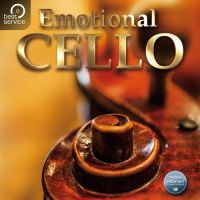 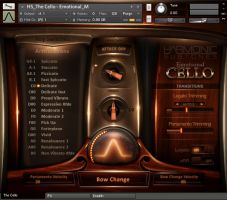 Emotional Cello by Best Service is a Virtual Instrument Audio Plugin and a Standalone Application and Soundware (samples or presets that load into other products) for macOS and Windows. It includes, and is therefore "powered by", Kontakt Player, which functions as a VST Plugin, an Audio Units Plugin, a VST 3 Plugin, an AAX Plugin and a Standalone Application.
The OS and Format icons below are for the latest version of Kontakt Player. The version numbers are for Emotional Cello.
Product
Version
1.0
System Requirements
Windows 7 or Windows 8 (32/64-bit), Intel Core Duo or AMD Athlon 64, 2 GB RAM (4GB recommended)
Product
Version
1.0
System Requirements
Mac OS X 10.8, 10.9 or 10.10, Intel Core Duo, 2 GB RAM (4GB recommended)
Tags
Tags:Solo CelloBest ServiceCelloCinematic CelloEmotional CelloHarmonic SubtonesKontakt Instrument
Instrument
Formats
Soundware
For
Native Instruments Kontakt
Copy Protection
Online Activation (Challenge / Response)
01 Valse Nr 1 - By Przemyslaw Kopczyk02 Valse Nr 1 - Undressed - By Przemyslaw Kopczyk03 Memories - By Gabriel Molinero04 Whats Up Speedy - By Magnus Jorgensson05 Whats Up Speedy - Undressed - By Magnus Jorgensson06 When Love Leaves - By Dirk Ehlert
My KVR - Groups, Versions, & More
11 KVR members have added Emotional Cello to 6 My KVR groups 13 times.
Not In Your MY KVR Groups
(or group limitation prevents versioning)
4 0 Favorites
4 0 I Own This
2 0 I Want This
1 0 My Actual Studio
+2 in private groups

Emotional Cello – never before, a virtual instrument could be played with this level of expression.

Emotional Cello is a new kind of virtual instrument, created by Harmonic Subtones, a Munich based developer team, to be used with Native Instrument's Kontakt 5 Player. Because of its powerful and simultaneously exceptional emotional sound, it opens up previously unknown verbal dimensions for the work with samples.

Emotional Cello has been continuously recorded in a musical context to capture the natural bowing and the individual expressions of real instrumentalists. Thanks to intelligent scripting, 16 play-styles and true legato, this library offers immense versatile possible applications. Emotional Cello offers all typical play-styles and articulations as well as unusual techniques such as:

Harmonic Subtones calls the underlying philosophy of the Emotional Cello project "Contextual Sampling". In search for perfect tone and highest inspiration, various string instruments have been recorded over a period of no less than four years. Conclusion was that nothing can match the natural vibrato with its artistic facets performed by skilled musicians. Although, any sample with an included recorded vibrato has obvious conceptual drawbacks, the sound of the performance itself will be a lot more inspirational than adding artificial vibrato. Based upon this insight, Harmonic Subtones went to extract the recordings with topmost musicality to forge a brilliant sounding instrument.

The result is a library of unmatched authenticity.

To achieve conclusive arrangements. Emotional Cello offers a multitude of articulations. This way, the several phrases, turns, variations, pickups and endings can be used as real autonomous phrasings without the need of ever being repeated. To be able to correctly use the various tones and articulations in a musical context, the corresponding key switches have been appropriately titled with names such as Delicate fast, Vivid or Moderate.

In addition, Emotional Cello also offers unusual and unconventional articulations, almost never to be found in competitive products. For example, the library offers:

Added are technical refinements, such as the rebowing-function which allows controlled directional change of the bow within a note using a key switch – uttermost useful with long sustains. Likewise, the vibrato-crossfade allows creating rhythmically perfect transitions from non-vibrato to vibrato-patches.

Emotional Cello has been recorded in the Mastermix Studio, Unterföhring/Germany. The instrument has been carefully mic'ed in a wood-paneled room with high ceilings and highest possible wall distance. Microphone recordings were performed intentionally close using two Neumann models KM184 and U47, preserving a discreet portion of the room's excellent acoustics. At the same time, the close mic'ing technique easily allows external processing, e.g. to accomplish an overall ambience for the mix. Just as needed, the integrated convolution reverb of the Kontakt 5 Player or the pure unprocessed original sounds can be used.

Emotional offers three true legato master-patches: Normal, Sulponticello and Harmonics. These contain about 80% of all recorded articulations, which are logically interconnected using advanced scripting. For example: A note being played in the beginning will sound perfectly natural because the chosen sample will also be a first note of the source recordings. The same goes for legato- and sustained notes: All samples originate from a corresponding context of the original recordings.

Approximately 50 additional single-patches contain a selected articulation each. Choices range from simple sustain-patches to dynamic crossfades between four layers. These patches are useful for producers preferring to arrange different articulations on different MIDI tracks instead of switching these by key switches. To achieve highest authenticity and liveliness, the patches offer four round-robin-samples for long notes and up to eight for short notes.