EpicPress
by Cut Through Recordings

EpicPress by Cut Through Recordings is a Virtual Effect Audio Plugin. It functions as a VST Plugin, an Audio Units Plugin, a VST 3 Plugin and a LV2 Plugin. 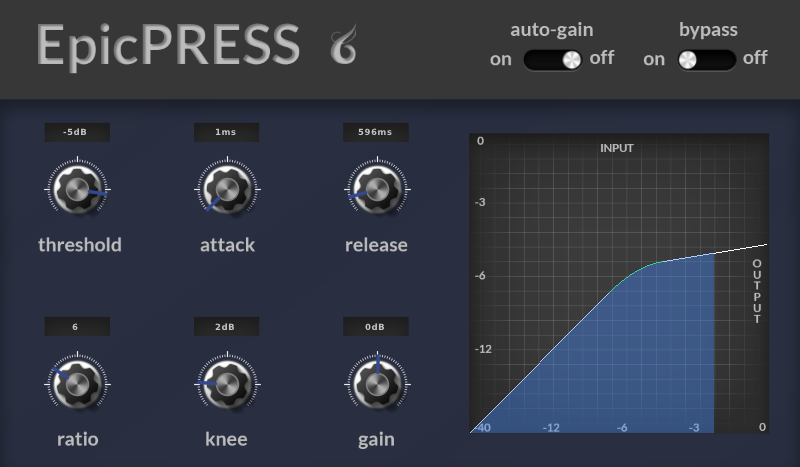 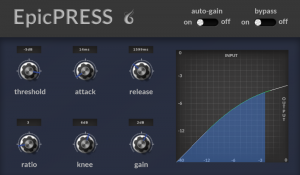 Introducing EpicPRESS from Cut Through Recordings! EpicPRESS is designed to be as flexible as possible, giving you full control over your dynamics. This plug-in features stereo-linked compressors to give a smooth and even compression across both channels, as well as automatic make-up gain. The one of a kind display shows the threshold, knee, and output peak level as one.

Threshold is measured in decibels and ranges from 0 to -40dB.

EpicPRESS has a soft-knee function which is measured in decibels with a max width of 12dB. 0dB results in a hard knee.

This compressor will feel at home on any track and any workflow. Add it to your toolbox and find out for yourself.

Will there be a demo?

There may be in the future. It's something I havent really considered until now, but I would like to make that available. I will look into it.

Demos for EpicPRESS as well as all of our other paid plugins are now available! Feel free to download it from our website and give it a try.

Just purchased the plugin, very inexpensive (just a quick test in Bitwig and working nicely) and thanks for the bass wav files and pop soundshaper VST which were free.