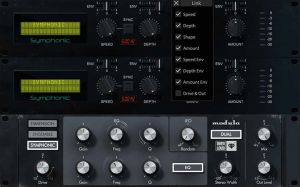 Gem Modula by Overloud is a Virtual Effect Audio Plugin for macOS and Windows. It functions as a VST Plugin, an Audio Units Plugin, a VST 3 Plugin and an AAX Plugin.
Product
Version
1.0
Product
Version
1.0
Tags
Tags:ModulationGem ModulaOverloudUniversal 2 Binary
Effect
Formats
My KVR - Groups, Versions, & More
12 KVR members have added Gem Modula to 6 My KVR groups 16 times.
Not In Your MY KVR Groups
(or group limitation prevents versioning)
9 +2 I Own This
2 0 I Want This
2 0 Favorites
1 0 My Perfect Studio
1 0 My Actual Studio
+1 in private groups

Gem Modula is the latest edition to their Gems series of mixing/mastering plug-ins, that emulate classic modulation units such as the Dimension D, Solina Ensemble and SPX90.

Along with emulations of the original units, Overloud also extends the features of the original hardware and combines the flexibility of the digital world with the character of analog processing:

based on 3 of the most famous chorus in history, the dimension based on the Dimension D.

Known as much for its stereo enhancement and incredibly spacious sound, .

The ensemble unit dedicated for keys, synth and pads and the Symphonic.

based on the spx 90 one of the most famous chorus used by zakk wylde in his albums.

with ozzy osbourne and by mike stern all of this in a single plug-in.

as soon as I opened the plugin I was particularly impressed by the graphic quality and the details that the overloud team offered.

I immediately noticed that in addition to have these three units there are an input saturation, an eq to sculpt the signal without having the need to use other units.

Another aspect to consider is the possibility of having the main parameters controlled by an input envelope.

By ease of use I mean that the interface makes it easier to understand the rack units that the Overloud team wanted to bring to users.

The factory presets also help the user to interact more effectively with this plug-in, which offers more than 30 presets.

All the main parameters can be controlled by the envelopes.

LFO shapes can be mod so you can have fun experimenting changing the motion of the modulation and the resonance.

How does it sound?

As a guitarist, having an spx90 in my studio, I immediately tried to do an A/B test between the plug-in and the real deal, copying the settings of the famous preset 15 of the spx90 and believe me they sounded the same.

I immediately played a few songs from the album no more tears and was pleasantly surprised by how similar the sounds were, and by "similar" I mean:

the depth of the chorus.

Whether you're a guitarist, keyboardist, singer or producer, this plug-in gives you the chance to add a touch of the 80s and 90s to your sound or mix.

Among the many aspects I enjoyed the SYMPHONIC impressed me a lot.

The quality and fidelity with which the team has worked to give the user a product as faithful as possible to the real deal is impressive.