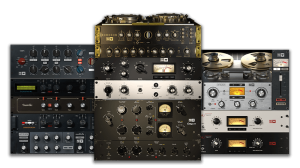 Bundle of 5 Gems by Overloud is a Virtual Effect Audio Plugin and a Standalone Application for macOS and Windows. It functions as an Audio Units Plugin, a VST 3 Plugin, an AAX Plugin and a Standalone Application.
Product
Version
1.0
Product
Version
1.0
Tags
Tags:BundleBundle of 5 GemsGEM Studio PluginsOverloudReverbUniversal 2 Binary
Effect
Formats
My KVR - Groups, Versions, & More
0 KVR members have added Bundle of 5 Gems to 0 My KVR groups 0 times.
Not In Your MY KVR Groups
(or group limitation prevents versioning)

GET 5 GEM PLUG-INS OF YOUR CHOICE AND SAVE

By purchasing this bundle you will receive a redeem code which allows you to unlock 3 Gem Plugins of your choice:

CHOOSE FROM THE ENTIRE COLLECTION

The Gem plug-ins are the Overloud emulations of legendary studio processors, extended beyond the original hardware. Discover the entire collection.

The Gem MODULA includes three of the most iconic modulation units in a single plugin. In addition to offering the most faithful emulation available today, it allows to extend the original tone capabilities by adding many features which are not available on the analog units:

Products similar to Bundle of 5 Gems...