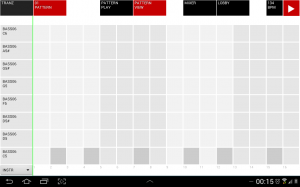 GrooveCloud is a collaborative music sequencer for the Android platform that enables users to make music together. Within GrooveCloud, songs can be composed by multiple musicians at the same time. For example, imagine yourself arranging a drum pattern while a friend is taking care of the bass section and someone else is arranging the track. The interaction is also available in the mixer and the fx section, allowing remote set of the mix scene on all the devices connected.

GrooveCloud was designed to respond to a specific need: having a musical sketchpad with a "cloudy" feel. If you have experienced musical collaboration you are likely to have been into a number of frustrating problems like missing plugins, lost revisions, lost files. Also, the practice of bouncing projects might diminish the musical interaction always found in "live" jams.

With GrooveCloud you are able to: