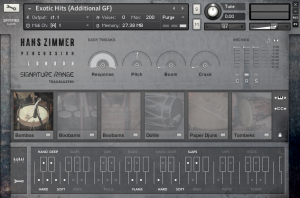 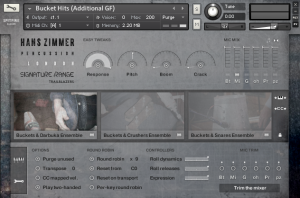 Hans Zimmer Percussion HZ01 by Spitfire Audio is a Virtual Instrument Audio Plugin and a Standalone Application and Soundware (samples or presets that load into other products) for macOS and Windows. It includes, and is therefore "powered by", Kontakt Player, which functions as a VST Plugin, an Audio Units Plugin, a VST 3 Plugin, an AAX Plugin and a Standalone Application.
The OS and Format icons below are for the latest version of Kontakt Player. The version numbers are for Hans Zimmer Percussion HZ01.
Product
Version
1.1
Product
Version
1.1
Tags
Tags:PercussionCinematicHans Zimmer Percussion HZ01Kontakt InstrumentSpitfire Audio
Instrument
Formats
Soundware
For
Native Instruments Kontakt
Copy Protection
Online Activation (Challenge / Response)
My KVR - Groups, Versions, & More
17 KVR members have added Hans Zimmer Percussion HZ01 to 6 My KVR groups 19 times.
Not In Your MY KVR Groups
(or group limitation prevents versioning)
8 0 I Want This
4 0 Favorites
4 0 I Own This
1 0 My Actual Studio
+2 in private groups

Hans Zimmer is one of the most successful, influential and prolific film composers of his generation. Having won countless awards (including an Oscar accompanied by an embarrassment of academy nominations). HZ's scores have underscored a generation of hugely successful films, that have turned over billions of dollars, countless awards and critical acclaim. Hans has defined not only a compositional style, but also production approach and sonic innovation that has influenced a generation of composers.

Spitfire Audio are delighted and honoured to present a series of products produced by Hans Zimmer and his diamond class team of Grammy winning engineers, musicians and technicians. Where Hans Zimmer's style approach to sonic creation is often copied or emulated we're proud to present to the world at large HZ's definitive take on his trailblazing approach to cinematic percussion production. Herein lies not an emulation or synthesis of his approach, but a recreation. The same studio, musicians, instruments, signal chain and talented engineers, sitting alongside a decade of experience, innovation and refinement overseen in every detail by Hans himself. The same excruciating attention to detail, perfection but most importantly the endless choice for tweakability and customisation you'd expect of the greatest of sound-smiths.

Recorded at Air Studios via an unsurpassable signal chain. 96 rarefied microphones, into Neve Montserrat pre-amps, the world's biggest Neve 88R desk (which was exhaustively re-gained at every dynamic layer for optimum signal quality), via a dual chain to HDX and Prism converters running at 192k. Well over 30 TB of raw material from these sessions alone.

The London Ensembles sessions feature the cream of Hans Zimmer's hand picked percussion corps playing a distillation of a decade's worth of musical experimentation and innovation. This is not an imitation of techniques explored in films including Gladiator, Black Hawk Down, The Dark Knight and Inception. It is a truthful recreation.

The library consists of microphone positions (as detailed below) mixed in stereo and 5.1 by Grammy and Oscar winning engineers: Alan Meyerson, Steve Lipsom, Junkie XL, Geoff Foster and Hans Zimmer himself.

When you plug in and play this material you will experience a feeling not dissimilar to strapping into a freshly delivered Aston Martin albeit with a choice of livery and paint work that you can repeatedly interchange and customise to your heart's content.
We have recorded the drums and articulations each with up to 9 round robins and 6 dynamic layers per hit, at Air Studios through the finest microphones, the finest Neve pre-amps into the Neve 88R desk via prism AD converters at 196k 32-bit floating point (which we have SRC'd to 24-bit 48k).