HATEFISh RhyGenerator by HoRNet is a Virtual Instrument and a Virtual Effect Audio Plugin. It functions as a VST Plugin, an Audio Units Plugin, a VST 3 Plugin and an AAX Plugin. 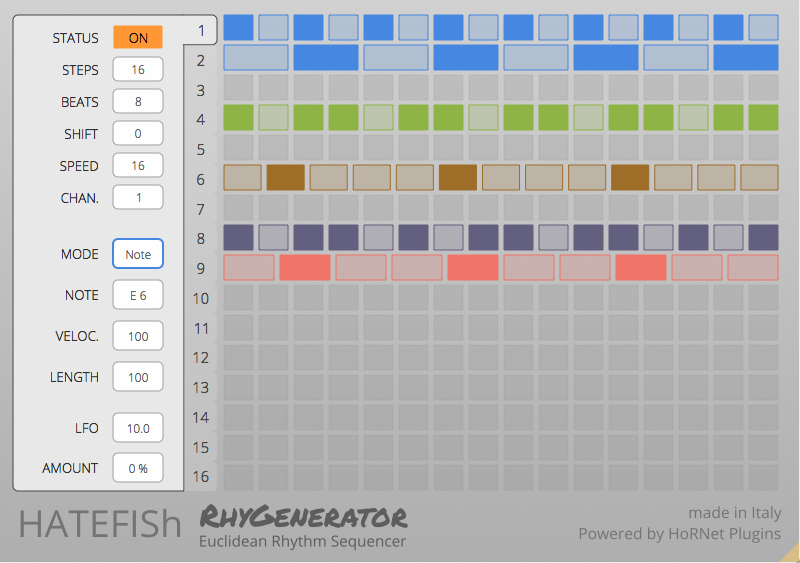 RhyGenerator is an Euclidean step sequencer made by HoRNet Plugins together with the electronic music artist HATEFISh. The sequencer is designed to distribute as evenly as possible a certain number of "beats" in given number of "steps".

Simply put, with RhyGenerator you can create up to 16 different rhythms, consisting of up to 32 steps each. Those 16 lanes you have on the GUI of the plugin are actually 16 different step sequencer linked to your DAW tempo and each of the sequencer can work in multiple modes:

In the "Note" mode the sequencer outputs the specified note following the rhythm generated by the Euclidean algorithm, in "Arpeggiator up" or "Arpeggiator down" mode the sequencer outputs the notes on the plugin input from lowest to highest (or vice versa) following the specified rhythmic pattern.
In "Chord" mode all the notes on the input are played together on every active beat and in the last mode, the "Control" mode MIDI control change messages are used instead of notes, allowing you to automate rhythmically any parameter of your synths .
Every one of the sequencers allows you to control the number of steps and beats separately, also the the note mode you can control the velocity and the length of the note, in the control change mode the note number becomes the "control number" and the velocity becomes the "control value".
Of course you can assign a different MIDI channel to every one of the step sequencer to be able to control up to 16 different synths and in addition to these controls we also thought it was cool to add an LFO to every sequencer that can modulate the MIDI message value, velocity for "Note" mode and value for "Control" mode.

This cool cross-platform MIDI FX offers the best application of Euclidean beats to melodic, tonal material I've yet found, because it has two arpeggiate modes, which loop whatever notes you hold through however many tracks you've got set to arpeggiate. Other tracks can be set to any specific note, or to play a held chord, or to send MIDI CC. I just posted a video demo of all this in the topic here: https://www.kvraudio.com/forum/viewtopic.php?f=6&t=517113&p=7474380#p7474380

Apart from this killer feature, the plugin is about as rudimentary as it could be: No presets or saving, no rotating of tracks to offset the pulses relative to other tracks (only reason I docked it a star—REALLY hope they add rotating!), but in exchange it's super simple and elegant, and dirt cheap! I've got a lot of other ways to implement Euclidean beats, but this is so far my favorite because of that brilliant arpeggiate feature, which of course is just as cool on drum kits. It makes interacting with the beat totally fun and powerful.