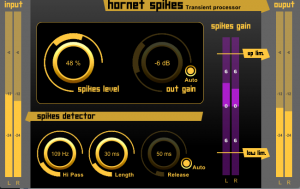 HoRNet Spikes by HoRNet is a Virtual Effect Audio Plugin for macOS and Windows. It functions as a VST Plugin, an Audio Units Plugin, a VST 3 Plugin, an RTAS Plugin and an AAX Plugin.
Product
Version
1.0.4
System Requirements
Windows XP or later
Product
Version
1.0.4
System Requirements
MacOS X 10.6 or later
Tags
Tags:Transient ProcessorHoRNetHoRNet SpikesTransient DesignTransient DesignerTransient Processing
Effect
Formats
Copy Protection
None
My KVR - Groups, Versions, & More
9 KVR members have added HoRNet Spikes to 6 My KVR groups 14 times.
Not In Your MY KVR Groups
(or group limitation prevents versioning)
5 0 I Own This
4 0 Favorites
2 0 My Actual Studio
1 0 My Perfect Studio
+2 in private groups

Spikes is a transient processor, thanks to it's intelligent auto settings you need just one knob to manipulate the sound, but if you want to tweak it every control is there at your fingertips.

Working with audio often happens that you need to manipulate peaks and body of the signal, sure you have compressors at your disposal but a compressor needs a fixed threshold to work, a plugin like HoRNet Spikes on the other hand uses a relative threshold so you don't have to worry about the level of the signal.

The fast peak of a snare or an acoustic guitar is detected using the difference of two envelopes, one with fast attack and the other with slow attack, the resulting signal represents the peak over time. The detected control signal is then applied to a gain stage that reduces or increases the audio level according to the setting of the "spike level" control.

HoRNet Spikes allows you to control the length of the detected peak, make the plugin faster or slower using the release knob (that has handy auto button) and reduce the weight of low frequencies in the detection process thanks to its high pass filter.

To compensate for output changes you have the "out gain" control that also have an out setting that keeps the audio to a constant intensity level.