BUYING! X Checkout $129.00Buy Now!
entropy:EQ+ by sonible is a Virtual Effect Audio Plugin. It functions as a VST Plugin, an Audio Units Plugin, a VST 3 Plugin and an AAX Plugin. 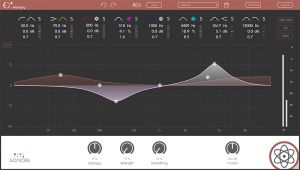 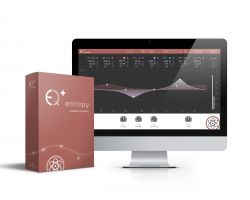 Edit harmonic and inharmonic components like transients with entropy:EQ+

The entropy:EQ+ has the capacity to differentiate between harmonic and inharmonic sound portions, substantially simplifying things like the postproduction of transients. Frequency-selective manipulation makes it possible to only edit the strokes of individual instruments within a track. This functionality works miracles not only with complex instrumental tracks but also with recordings of human voices: consonants can be raised in an instant, considerably improving the intelligibility of speech in both vocal recordings and interviews.

smart:EQ+ is part of the EQ+ series by sonible. The three linear-phase equalizer plug-ins of the series – smart:EQ+, proximity:EQ+, and entropy:EQ+ – boast special features that far exceed conventional equalizing technologies.

A new approach to EQing

With its new EQ+ series, sonible is taking the next big step in its product evolution. The company has made it their goal to combine creative engineering with the innovative potential of the digital domain. The equalizer plug-ins in this series can handle audio information that have eluded most sound engineering tools until now, making it possible to modify audio material in an unprecedented depth and pervasiveness.

The core of the three revolutionary equalizer concepts is also available within sonible's frei:raum plug-in, which was enthusiastically welcomed by international media outlets like Bonedo, Studio Magazine, ask.audio, and Sound on Sound. The EQ+ series now bundles these plug-ins into a budget-friendly tool that also includes a range of additional features.

My KVR - Version Control & Lists
Not In Your MY KVR Groups
(or group limitation prevents versioning)
8 people have added entropy:EQ+ to 6 My KVR groups 12 times
3 0 Favorites
3 0 I Own This
2 0 I Want This
2 0 My Actual Studio
1 0 My Perfect Studio
+1 in private groups

HoRNet New Chinese Year sale: plugins up to 50% off, bundles 20% off

Time+Space NAMM Special Deals - Save Up To 70%

Strix Instruments NAMM Sale - Up To 87% Off