HoRNet ThirtyOne by HoRNet is a Virtual Effect Audio Plugin. It functions as a VST Plugin, an Audio Units Plugin, a VST 3 Plugin and an AAX Plugin. 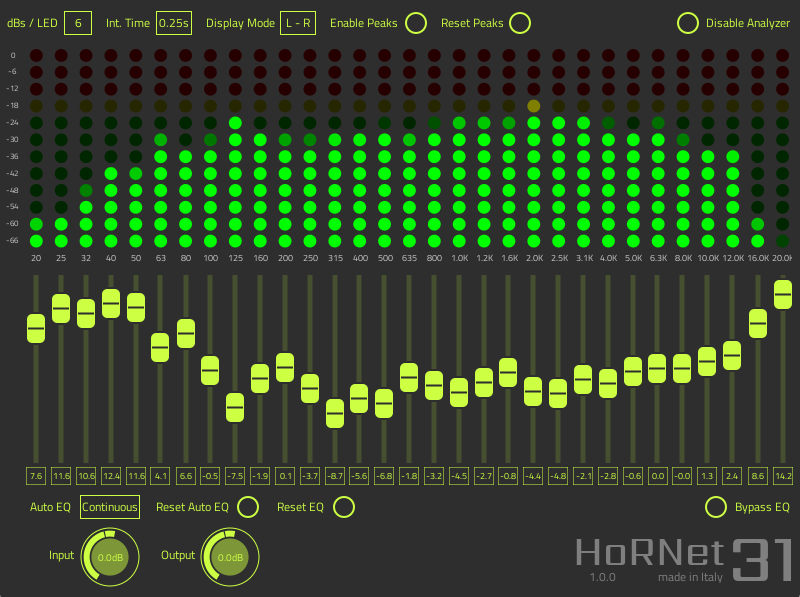 This pair of tools is very common in every rack of any live mixer as the final tool in the master bus, for this reason we decided to recreate the behaviour and specific time response of a very common Italian analog spectrum analyzer.

The equalizer is also inspired by analog units allowing ThirtyOne to recreate that master chain feeling that you are used to.

We put a great care in recreating the smooth lighting of LEDs driven by a smoothly increasing current flow, each column of twelve LEDs comes after a 20dB/octave filter (like the original hardware unit) and it's response speed is selectable between 0.25, 1 or 4 seconds allowing you to see both fast peaks and average frequency level.

Each of the LED of the bar can have a value of 1, 2 or 3 dBs (like in the original hardware unit) and we also added 6dB/LED option, when changing the resolution the scale on the left of the LED display updates accordingly.

We also added a maximum peak hold LED for each frequency band that can be enabled or disabled that the original unit did not have.

Right below the spectrum analyzer we have put the 31 sliders that will let you shape the output and fix any particular resonance.

The equalizer has a very special feature called the "Auto EQ", when enabled (both in static and continuous mode) the output of the spectrum analyzer is used to tune the gain for each of the EQ band allowing the equalizer to automatic set itself so that the maximum harmonic balance is achieved, removing frequency masking and improving mix clarity.

You can choose between two different modes for the "Auto EQ", the static and the continuous one.

The first takes in consideration only the maximum peak of each band so that you have an EQ curve valid from the beginning to the end of the mix, this mode is very useful in mastering a single track as it gives a "static" EQ correction curve.

The second algorithm is more complex and continuously look at the level of each frequency band and consequently updates the equalizer to reduce masking and keep the track balanced in ever single moment.

Continue this sentence with song lyricsby Aloysius @ 10:01 in Off Topic ClassicsOversampling LPF questionby Z1202 @ 9:58 in DSP and Plug-in Development

RME or Motu Audio Interface for upgrade?by e@rs @ 9:47 in Hardware (Instruments and Effects)View All Latest Posts