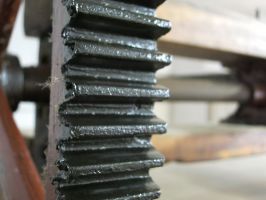 Laundry Mangles features the sounds of domestic machines that once where used in many public washhouses. Basically, the weight of a huge box filled with stones was used to press big pieces of linen, bed sheets or towels wound on rollers below. Early models were operated by hand which was very exhausting and soon the machines were equipped with electric motors and belt drives.
For this particular library Detunized captured 5 different models of various ages that are still in use. All mangles have been extensively recorded so that any imaginable perspective and operational state is covered. This includes full runs, driven by belt drive and crank shaft as well as protective grating handlings, idling motors plus many more details.
Due to the complex mechanical interactions between iron cast and wood components Laundry Mangles forms a comprehensive collection of heavy squeaks, moans and rumbles that can be used as starting point for various foley appliances far beyond the original source of the sounds.