L'il Poly-Ana by Admiral Quality is a Virtual Instrument Audio Plugin. It functions as a VST Plugin and an Audio Units Plugin. 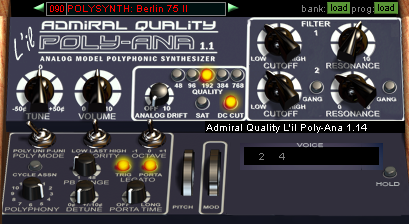 L'il Poly-Ana is the preset-player version of Admiral Quality's flagship Poly-Ana analog model synthesizer plug-in. L'il has all of regular Poly-Ana's sound features and capabilities, only your ability to design new patches has been restricted. But, every performance related control has been left in. The entire simulation control section as well, including Quality (CPU), Saturator and the Analog Drift feature. Plus the cutoff and resonance controls for both filters - the most popular controls for live voice tweaking.

L'il Poly-Ana comes as VST instrument-only, without the effect version of the plug-in as included in the full version of Poly-Ana.