BUYING! X Checkout $37.50Buy Now!
Loopscape by Rhythmic Robot is Soundware (e.g. samples or presets that load into other products). 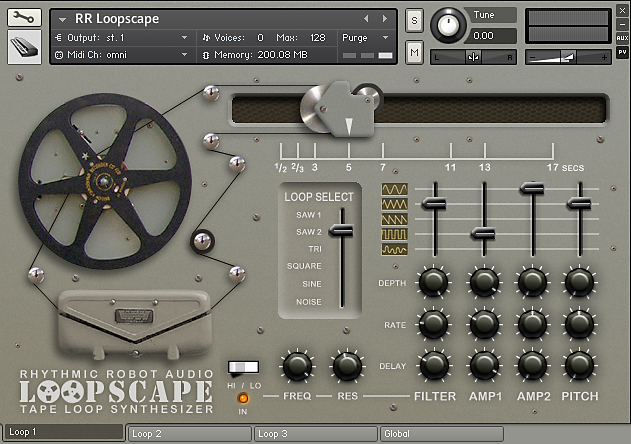 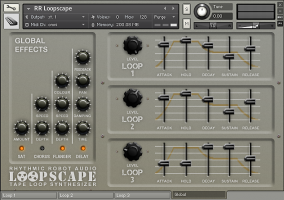 Loopscape is a tape-loop based synthesiser inspired by experimental musical pioneers of the 60s and 70s like Brian Eno. Eno created ambient music by combining tape loops of different lengths to create non-repeating, infinitely-varying compositions. Loopscape takes that concept and turns it into a synthesiser.

At its most basic, Loopscape offers the user three virtual tape loops which can be run simultaneously. Each of these can be loaded with any one of six classic analog waveforms, and each can be set to run for between half a second and 17 seconds (in non-regular intervals). Each of the three virtual loops can be independently sculpted by a high / low pass resonant filter with LFO, and three further LFOs which control amplitude (twice) and pitch. Five LFO wave shapes are available, including a random wave. Although the controls are simple, the complexity of the underlying loops, plus the modulation, means that a single note played by Loopscape will not repeat its sonic fingerprint for thousands of years.

"Dripping in oxide... You can almost taste the wow, flutter and print-through as the recordings faithfully, if perversely, reproduce every blip, hiss and click... example patches like Shenai Drift show off its warmth admirably" – Sound on Sound magazine review

Every component sound within Loopscape was recorded onto analog tape, using a variety of old valve-driven equipment from the 50s and 60s. The waveforms themselves were sourced from analog synthesisers and were deliberately chosen for their irregular sonic character. Wow, flutter, distortion, print-through, and a wide variety of other tape-based "flaws" contribute extensively to the character of Loopscape's synthesis engine.

Loopscape is available now from Rhythmic Robot's website and is priced at £34.95. It is compatible with Kontakt version 4.2.3 and above (including Kontakt 5). Kontakt Player is not supported.

This creation and its companion Loopscape Vinyl are becoming essential in my studio. They provide a lovely patina to anything that might be too shiny. Perfect for a bit of background, they can stand on their own in the foreground too. I find myself trancing out with these as they provide a perfect soundtrack to late night experimentation. The level of tweakability makes it easy to come up with a fresh vibe every time.

It's as if the Professor and Mongo are circuit-bending the very fabric of spacetime itself. They went from 'I want this' to 'My perfect studio' in to time at all.

I'm a new user with this but I'm already using it a lot! It's really good for the creativity. It makes my brain cook up tunes, building on this instrument.