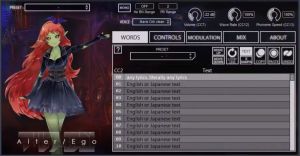 Marie Ork is a voice bank for the free Plogue Alter/Ego singing synthesizer. She was created from recordings of a female death metal vocalist. Version 1.000 was created for the 2016 KVR Developer Challenge, and included two voices: growl which is a noisy unpitched vocal and space with capable of producing a discernible pitch with some unusual tones.

In version 2.0, her voice bank contains four voices, adding the clean singing voice and the talker. All the growl and space voice recordings were of English phonetics, while the clean and talker voices also have a few additional phonemes for Latin. Japanese is also supported, but will have an accent. More than 20 presets are included ranging from conventional singing to dubstep basses. The total download size is 652 MB.