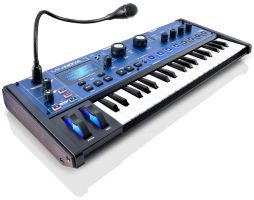 Firmware
1.0
Interfaces
USB 2
I/O
¼” Line Out
Power
Bus Powered PSU (External)
My KVR - Groups, Versions, & More
11 KVR members have added MiniNova to 6 My KVR groups 14 times.
Not In Your MY KVR Groups
(or group limitation prevents versioning)
5 0 I Own This
4 0 Favorites
2 0 I Want This
1 0 My Actual Studio
+2 in private groups

MiniNova is a compact synthesizer with features like push-button Animate controls and VocalTune voice effect. MiniNova is built around the same synth engine as Novation's flagship, UltraNova. Featuring three oscillators, up to five effects, two filters, six envelopes, three LFOs, and 36 different wavetables, it's designed to create a range of sounds for every genre. MiniNova is designed for synth players who want to find sounds quickly. Patch browsing comes courtesy of a large genre-select knob and an easy-to-use scroll wheel, bringing instant search and recall of the 256 factory and 128 user patches. A parameter matrix puts 24 sound-shaping tools on four large, tactile knobs. There is also a dedicated filter cutoff.

MiniNova features VocalTune, an effect that can tune the user's voice to the note being played on the synth in real time. It also features a new vocoder engine, which can be fed by either the included gooseneck mic or the external input. Novation's 'Animate' buttons let the user to apply up to eight modulations, with a hold button that latches any or all of the animations. Arpeggiate mode lets the user to play and program their rhythmic synth parts on the fly. MiniNova connects to a computer via USB, where free plug-in software can be used for patch library management.

MiniNova has two quarter-inch mono jack outputs, a stereo headphones output, full-size XLR and jack inputs for routing sounds through the vocoder and on-board effects, as well as a five-pin MIDI input and output and an input for a sustain pedal. Power can be supplied via USB or a 9V DC power supply (included).