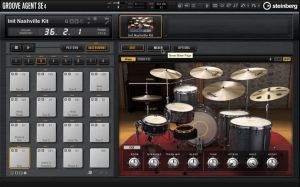 Nashville — The backbeat of country
The Nashville VST Sound Instrument Set for Groove Agent brings you the sound and spirit of world-famous Music City, USA, and puts it right into your productions.

Recorded by Grammy-award-winning sound engineer Chad Carlson at the legendary Sound Emporium Studios in Nashville, Tennessee, the drum kit comes with over 8,000 samples and hundreds of grooves that will instantly enhance your productions.

The top-notch recordings with 24 different microphone channels make it universal for all genres: from true organic country that purists long for to pop-flavored country rock. The remarkable room of the studio together with the striking microphone setup and outboard equipment make the sound of the drums stand out in every way.

The 21 Styles that were exclusively recorded for this set are blending rock and country and range from chugging ballads and soulful blue-eyed R&B with country flavor mixed into energetic country rock and radio-friendly contemporary country productions.

The following drum set was recorded for the drum library:

All 20 Styles come with several intros and endings, main parts and fills and are produced for composers and songwriters in particular.

Complete drum tracks for traditional country songs with rock influences, pop country or just cool vibes with a classic-country twist can easily be put together with just a few clicks in your DAW of choice. All Styles feature the Style Player of Groove Agent that lets you instantly change the complexity and intensity of each groove.