OctBUZ by buzzroom is a Virtual Effect Audio Plugin for Windows. It functions as a VST Plugin. 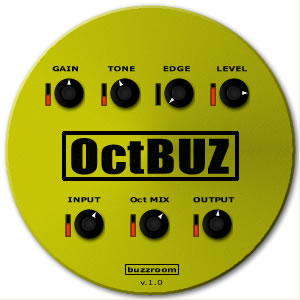 This plug realy surprised me and i ended up spending an evening playing around with it which led to me creating a bank of 64 presets (which i hope to upload soon).
The latest incarnation is version 1.1 which is slightly different from version 1 that is currently pictured in the k-v-r database - the latest version has some additional controlability which perhaps makes all the difference.
The range of treatments i was able to squeeze out of this plug ranged from mild overdrive , distortion , doubling , thickerning , filtering to pseudo equalisation......you get my drift!
I find this plug is more usefull to me than the range of similar treatments that Logic has and it is certainly more flexible as well.
I think the secret to using this plug is how you use the gain structure i.e the gain , level , input and output controls that have a subtle (or not!) effect on the overall results that can be achieved.
Monophonic sounds need to be treated in a seperate way to layers of sound i.e polyphonic.
I found that using a wide variety of sound sources such as guitar , bass , organ , lead , orchestral ect allied to single and polyphonic playing styles resulted in very different but emminently suitable fx patch creation. The real positive that came out of using this plug (for me)is that if you spend time getting to know 'your' plug rather than putting it in the recycle bin because it is initially not doing what you expected or wanted you might end up surprising yourself!
So there you have it a FREE , flexible and in my opinion very usable sound processor.Read Review