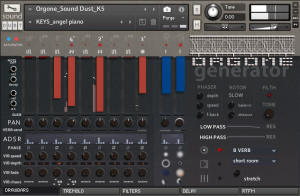 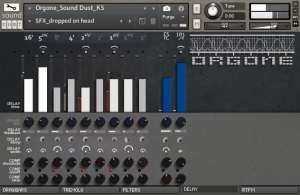 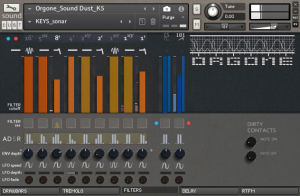 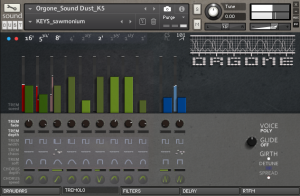 Orgone by Sound Dust is Soundware (samples or presets that load into other products) for macOS and Windows.
Product
Version
1.0
Product
Version
1.0
Tags
Tags:Synth (Analogue / Subtractive)Additive SynthesisDSi Pro2Kontakt InstrumentMoogOrganOrgoneRoland SH-101sound dustYamaha CS15
Soundware
For
Native Instruments Kontakt
Soundware
Formats
NKI
My KVR - Groups, Versions, & More
4 KVR members have added Orgone to 3 My KVR groups 6 times.
Not In Your MY KVR Groups
(or group limitation prevents versioning)
3 0 I Own This
2 0 Favorites
+1 in private groups

ORGONE began as an experiment around the idea of "what would a Hammond organ with sawtooth waves sound like ?" and slowly grew into a huge modular machine that combines multisampled waveforms from several classic synths into a 1GB+ Kontakt sample instrument that goes way beyond the possibilities of any of the originals.

ORGONE has the basic additive architecture of the drawbar organ to create a deeply controllable instrument with huge polyphony and a complex but relatively simple operating system and then adds the filters, envelopes, LFOs etc of subtractive synthesis to each individual drawbar. It's like having 4 classic 11 oscillator synths in one box.

Because the quirks and character of the original ageing synths (30 plus years in the case of the CS15) have been retained ORGONE has a living organic sound that can do thick creamy basses, woozy string synth pads, throbby beat synced cinematic backdrops, gnarly organs and 60s keyboards, ethereal theremins, evolving space drones and GREAT BIG synth tones.

ORGONE needs a FULL version of Kontakt 4 or above to work properly and there are two slightly different versions.

K4 version will work in every Kontakt version above 4 and includes 83 .nki presets each with its own modwheel morphing control.

K5 version needs Kontakt 5.4.1 or above and includes 6 .nki presets with a total of 151 snapshots each with its own Modwheel morphing control. K5 users can also use the K4 presets which are different to the K5 ones.

Everybody has an inner organist.

From seeing Quasimodo in the movies, .

or from hearing Bach in the elevator on the way to your first big job interview.

Kontakt never brought out mine before.

This is a true modern implementation, it's got an edge.

Absolutely stunning (I almost said collection of) sounds, but it isn't a collection. It is a complete instrument.

The drone tones of the Throbber bank alone are worth the admission price.