OverDubber 2 by KlangLabs is a Virtual Effect Audio Plugin. It functions as a VST Plugin. 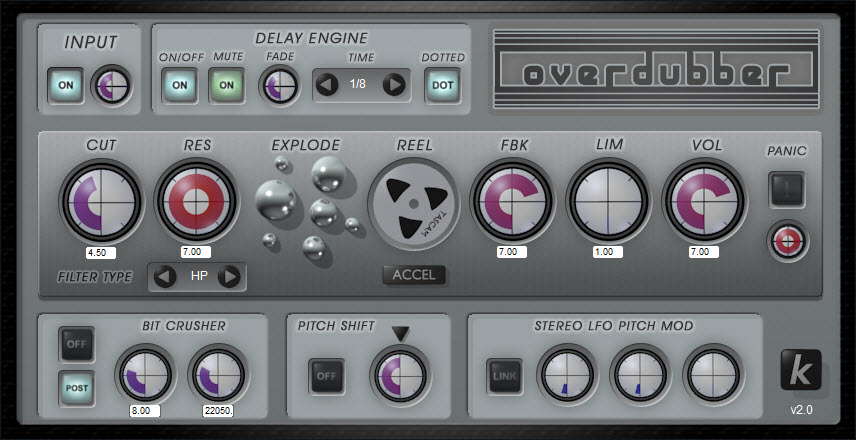 Remember, OverDubber 2 was primarily designed to create trippy delays out of the incoming audio, for example the end of reggae/Dub vocal phrases. For example, if the vocals say "Out to the beat!" and you want "Out to the Beat! Beat! Beat! Beat! Beat!" where that snippet modulates slowly into a trippy world of sounds. You get the drill right?

1) Automate the Delay Engine "MUTE" to open the incoming audio at a specific moment (example: end of a reggae vocal phrase) where you want the delay to start.

2) Automate the Delay Engine "ON/OFF" button to clean things up when you stop playing the project or move previous to the phrase you want repeated. Will be off most of the time, and go on a big earlier than the "MUTE" button to allow the engine to start without clicks.

3) The "Explode" button is your friend, it will allow you to keep the delay alive, otherwise it will behave more like normal delay. Automate it to be off all the time and turn it on where you want the delay to start feeding back constantly and onwards until you go off again when you want the delay to fade out.

4) Use the filter cut to slowly modulate the resonance as the delay repeats so it doesn't stay in one frequency. This will create trippy things!!.

- Based on it's old brother, OverDubber 2 is a delay FX specially tailored for morphing/distorting tails. In other words "Trippy tails"

- It's designed to work with high gain and resonance levels with an internal limiter that will not allow the signal to go too loud.

Useful on things like Dub, TripHop, DnB, also for EDM build ups when used with it's pitch shifter.

- Basically, OverDubber 2 is a stereo delay but it has a filter, a big crusher, a pitch shifter and an automatic stereo pitch LFO in the feedback loop, quite an unusual combo.

- You can turn them all on, or off as desired.

- I decided to update this plugin because I used v1.7 a lot in production for 10 years with great success so I decided to improve its internal effects and make a bigger GUI.

Its brilliant but dont take my word for it.

Best free plugin I've found in years! I've only been playing around with it for vocal effects so far, but it's been awesome. I think it would be great on anything though - drums (kick, snare, high hat), synths, guitars. What I like about this effect most is that it's pretty easy to dial in cool and original vocal effects without muddying the vocal or losing any of the singer's enunciation. All in all, I'm impressed, especially for free. Thank you.