ParisEQ by Matt Craig is a Virtual Effect Audio Plugin for Windows. It functions as a VST Plugin. 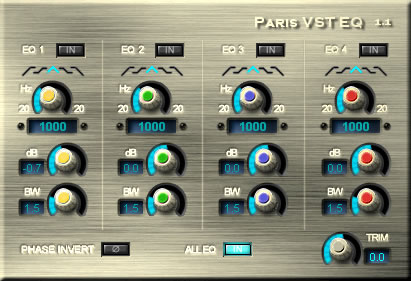 The Paris VST EQ is a 4-band stereo parametric VST equaliser plugin utilising the same algorithm as the E-mu/Ensoniq Paris system. It offers the same musicality and quirkiness as the original including soft-limiting, grungy distortion ability, and resonant behaviour under certain conditions.

Previously only accessible to those who owned the Paris custom DSP hardware, this unique EQ is now available to all PC DAW users. Paris users will also appreciate finally being able to have the same high quality EQ available on both native and card submixes.

It's very difficult to review an Eq as it is so much down to personal taste rather than objectivity. But I'll try.
Paris Eq is what I would call more of a specialFX Eq than a mastering Eq or a particularly sweetsounding Eq. It most certainly can be used for your average tracking duties though, but it really isn't clean enough or characterful enough to me for mastering duties. It lies somewhere in the middle of clean and character. It's OK for Eq cutting, but I'm wary of doing much boosting with it - the bass seems a bit too wooly or fluffy, the mids are OK but the highs can be a bit too harsh when boosted.
But it's no worse than many other free Eqs out there. And the fact it has its own special features actually make it quite a contender for most useful free Eq.

Features - it's the soft-limiting and resonance that are its best weapon (offhand, only TCNative has the same facility) - it can be used like a filter (which to all intents and purposes is what filters are). You can set boost to a maximum, fine tune the frequency and bandwidth, and make sounds very lively, even howl. And then if you sweep the frequency, you've got a nice tool for mangling sounds available. That can be useful for hats if you're very very careful - some hats etc can benefit from being a bit overdriven. I wouldn't normally use Paris for boosting Eq on highs - it can be too harsh, but when you use it as a specialFX, even in the highs it can sing.
As for cutting - I've no real complaints...an Eq has to be pretty bad to ruin a sound when cutting. It can compete with most Eqs here. I wouldn't boost more than the usual 3dB for precision tracking (unless specialFX) and again it's no worse than any other Eq there.)
It's free and it performs the usual Eq duties no better and no worse than most other free ones. But it has the specialFX qualities which gives it an advantage over the rest.

GUI - easy to use, pleasing on the eye. Each channel individually switchable on/off to save CPU. It would be a bonus to be able to type in values, but it's no big issue - the controls are fine enough to cope with mouse work. Invert phase - could be useful I suppose, although I never use it. A global bypass switch - big thumbs up for that - makes it easy to A/B compare to your original sound. It misses a graph to display your frequencies, although that's not a must-have on any Eq - it actually makes you use your ears rather than your eyes, so there's a good argument for omitting graphs - but it would be good to have the option.

Stability - no problems there. Minimal Cpu hit. I've never tested the latency (when used as an insert, it's compensated for in my host, so it's not any kind of issue)

VFM - it's certainly better than the standard Eqs that come with Cubase, so you should d/l if that's your host. I don't know about the other hosts, but I would imagine the same applies. Go spend money if you need a quality Eq for mastering, otherwise give Paris a run - it can be very good.Read Review