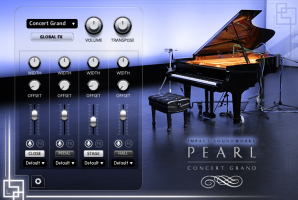 To capture the full range of the Yamaha C7, Pearl includes over 14,000 samples provided at 16-bit and 24-bit fidelity:

The Kontakt engine for Pearl provides users with extensive control over mixing, effects, and "under-the-hood" settings. Each microphone position can be independently mixed (volume, stereo) with per-channel routing, EQ, and compression. A global, analog-modeled effects rack is included as well, with tape saturation, compression, EQ and convolution reverb with more than 30 custom impulse responses designed just for Pearl.

Pearl Concert Grand is available now (MSRP: $119) at the link below.

What are you listening to now? Look on my works, ye Mighty, and despair!by seismic1 @ 10:58 in Everything Else (Music related)