Prophet V by Arturia is a Virtual Instrument Audio Plugin. It functions as a VST Plugin, an Audio Units Plugin, an RTAS Plugin and an AAX Plugin. 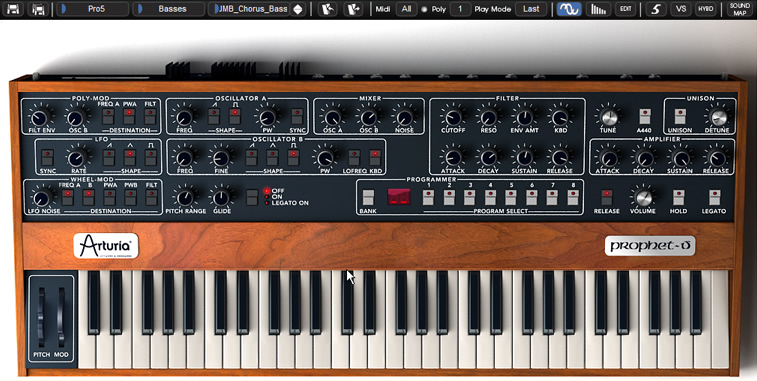 Prophet V is a hybrid of two synthesizers that changed the face of music during the '70s and '80s - the warmth of the Prophet 5, one of the first programmable polyphonic analog synths, meets the digital textures of the Prophet VS in this new plug-in.

The Prophet V allows you to mix digital sounds with analog. Play the Prophet 5 and the Prophet VS either simultaneously or separate. Deepen and round the sounds designing a sound palette unique to your style of creation, or stick with the sounds you have come to know and love.

Playing the Devil's advocate here, I basically agree with most of the views of the other reviewers. So, I'm going to ocus on the VS aspect,

Arturia's 'Prophet V2' V/VS hybrid in Version 2 sounds like melted butter, the photorealistic GUI even animates (albeit slowly and hesitatingly even on a fast i7 machine) when you change the emulated synth (V, VS or V+VS). Cute!

Now, I'm no great aficionado of Virtual Analogs per se. I never owned a Prophet Five and I have no desire to. But I owned a VS for a couple of years, until I couldn't stand the interminable glitches and problems. For instance, controllable aftertouch (which is a vital tool of expression in the VS) depended on the synth sitting on a 100 per cent flat and horisontal surface. As soon as I put it on a stand, it would add aftertouch all by itself because the case twisted ever so little. The authorised Seqiential service guy grew really tired of me (and the VS) after a year or so.

No such problems with Arturia's take on the VS. And it sounds beautiful. It really does!

The problem is – it doesn't sound quite like a VS.

A VS should screech and rasp and cut with a razor sharp digital edge. It should alias. And it should also be capable of producing the slickest analog strings I've ever heard.

Arturia's VS is too polite and polished. In fact, even though the factory patches are available, sometimes I have to really guess at which of the original sounds it's doing its to emulate.

Thinking that perhaps my memory had been dulled after many years, I fired up Vector Sector, the (unfortunately abandoned) virtual VS that was created by General Vibe, including people who had worked on the original Sequential Circuits instrument.

And there was the VS vibe as I remembered it!

The 'Prophet V2' VS emulationsometimes comes reasonably close, but in the end – no real cigar. And, in the buggy tradition of Arturia, Prophet V2 in VS mode crashes Live 8 in flames (Mac 10.6.8) every time I try to tweak the oscillator levels or waveforms.

So it seems I'll have to keep my aged G5 PPC Mac to be able to run Vector Sector, since it was never updated to run on Intel machines. Or can I hope that Arturia will get the VS right in (a hypothetical) version 3, with its warts and aliasing and all?Read more

One of the first synths I ever owned was a Pro-5. I had played with NI's Pro-53 and I liked it, but IMO and from what I remember of my Pro-5, this VST is a lot closer to the real thing.

The Prophet 5 was the workhorse of rock/pop bands of the late 70's early 80's and I still have some old Keyboard Magazines in my closet somewhere with the advertisements for the Sequential Circuits line of keyboards. I loved my Pro-5 and this VST redition doesn't dissappoint. I have the V2 version of this VST and Arturia did something really cool, the made this VST two plugins in one. You get the Prophet 5 and the Prohpet VS all in one plugin!

The Prophet 5 is the more famous of the two, but the lesser known VS was a digital wave table synth that produced some sounds that were impossible to get out of any other synth of the day except for the PPG Wave. The VS has wave sequencing capabilities that provide metamorphic sounds that swirl around the mix in a way few other synths are capable of out of the box.

This along with my OPX-PRO plugins are my "go to" plugins for a large variety of music I do that requires analog sounds. This is partly because I am very familiar with how to get the sounds I need out of them, but also because they both sound great! The Prophet 5 was never as thick as the Oberheim but it was as warm as a down jacket on a cold winter day. So if I need a warm expressive pad, or a lead with character, the Pro 5 does the job without muddying up the mix. If you really need lushness and thickness, then the Oberheim plugin probably suits your needs better. That said, you can get thick lush sounds out of the Pro 5 with some outboard EFX VSTs.

The built in EFX are somewhat rudimentary IMO and I've had the occasion to patch the output of this VST into other EFX VSTs to get the results I want, but if you take into account that the original had no EFX in it whatsoever, this is a welcome addition.

The previous reviewer mentions resource issues, but I haven't really seen any in the newer V2 version of this plugin, so maybe Arturia has fixed it. I have this plugin in virtually every VST rack I build for cover bands I play with. This is one of my favorite plugins and I would replace it in a minute if I were to lose it. If you need a workhorse plugin that covers retro analog sounds authentically and you can only buy one plugin, this would be the one to get. I always suggest you download the demo and try it out first to make sure it's what you need. In my other reviews of the Arturia plugins I mention that I bought the Arturia V2 Collection and this plugin was a part of it. I would have bought this one stand alone if I had to. I like it that much.Read more

The Installation was straight forward and hassle free, I got the free update from Arturia's website and installed it along with the new syncrosoft drivers. The Dongle is shipped inside the box, along with a plastic registration card.

Once the installation is done, I started Ableton Live 5 And Started up Prophet V. The GUI starts up in the Prophet 5 mode and is spot on in terms of a accurate visual reproduction. The VS mode is not accurate visually like the original, but it is nicely laid out and easy to get around in. The Hybrid mode has the VS stacked up over the Prophet 5 so it is one synth. Some people with smaller screens may not like that it takes up a lot of screen space in the hybrid mode, but it was not something that bothered me. I noticed one bug in Ableton Live 5, where if you re-opened the GUI after you closed it, that the Keyboard would disappear in the Prophet V's GUI. Also when you change from the Prophet 5 to the VS I noticed the Animation was a bit choppy and could have been a bit more fluid.

The sound of the Prophet 5 Emulation is very good, the default patch that the synth loads up with, sounds convincingly analog and warm to me. The famous monophonic sync lead sounds are very nice as well, and in unison you can get some incredibly big lead sounds. It definitely sounds like a Prophet, and in comparison to NI Pro-53 I find i like the Prophet V better. The downside to the sound quality, is that it is very CPU hungry, On my 2Ghz Centrino Duo it was pretty hungry in unison mode with 7 voices but it never froze up once. One of the things that you cannot do is process external FX with the synth, which the Pro-53 can do. The Prophet VS sounds good and has 127 waveforms that you can choose to load in 4 of the oscillators. The sounds remind me of a Korg wavestation but in a more harsher way. Its no wonder that Nine Inch Nails used the VS a lot.

With the synth in Hybrid Mode you can really get some interesting analog\wavetable combos, but this is where it can really get cpu hungry. One of the features I missed from Arturias Other synthesizers is the implementation of a Arpeggiator or a Sequencer. For effects, you get a chorus and midi syncable delay which can add a nice touch to your patches.

There are more than 500 presets included for both the prophet 5 and the VS, so people who want to start playing right away wont be disappointed.

Documentation was good and I enjoyed the way the manual was laid out. The history bit could have been a bit longer, but it would have made the manual a bit bigger than it already is.

I have not yet used customer support, other than getting the Free update that you can download on Arturia's website which is a major bonus. Arturia offered a forum but last i checked the forums were not as alive as they could be.

The value for money in this product is really good! You are getting 3 Synths in one package and it really does sound good.Read more

Check out this iconic synth from the 70s-80s and learn a little synth history.

More stuff on my channel:
https://www.youtube.com/channel/UCcLJYDoMmrX6udKU3TLYBcQ.

Average user rating of 3.67 from 3 reviews