Login / Register
My KVR0Updates
00 items | $0.00 CHECKOUT New
Plug-in Developer?
Search
Who are we in the KVR community in 2020?VOTE NOW
PSP MixSaturatorby

PSP MixSaturator by PSPaudioware is a Virtual Effect Audio Plugin. It functions as a VST Plugin, an Audio Units Plugin, an RTAS Plugin and an AAX Plugin. 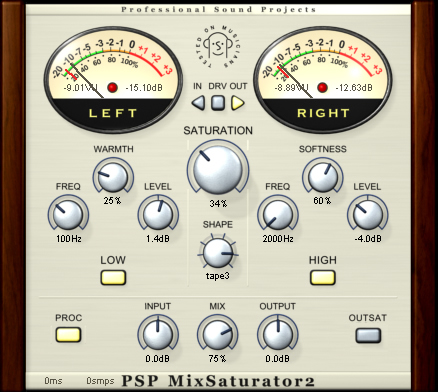 Part of PSP MixPack2 - a collection of six high-resolution, high quality audio processors designed to improve the quality of your digital audio tracks and mixes. These processors were not modeled on specific hardware analog processors, but rather on the sound and features of many analog circuits, with the goal of designing processors that can assist you in taming the sterility and harshness that often plagues digitally recorded audio. All plug-ins utilize 64-bit double precision floating point algorithms throughout their entire signal path and support sample rates of up to 192kHz.

PSP MixSaturator2 simulates the way that analog devices such as tape recorders and valve circuits warm up and "saturate" your audio material. This is achieved by adding harmonics, dedicated filtering, and dynamic processing. PSP MixSaturator2 uses three different algorithms to simulate these devices:

PSP do everything with character and quality. Mixsat is no exception - the bundle is good enough to be used on mastering, although Mixsat was intended more for mixing than mastering - Vintage Warmer is their big brother for mastering. Mixsat is single band as opposed to the 3 on offer in VW, but if your final mix is a good one, I find Mixsat good enough for mastering.

It imparts a very ear-pleasing warmth to a mix or to any group. The compression on the highs is intended to add top end sparkle, but personally I find it a little artificial-sounding and steer clear of it. But with a good mix, you don't need it anyway. The valve sim however makes any mix fuller and "warmer" (which is a pretty subjective term I suppose). Because of the way it emulates valves, you get limiting with harmonics - and you can choose 3 types of valve - which basically adds in higher order harmonics for the 3 types. I like the PSP sound of their valve sim - even on high settings it still sounds musical, and on type 3 it may hurt a full mix, but it is invaluable for crunching up a drum group or individual loop. You don't have to worry about compressor settings, attacks, releases, thresholds etc - you just turn up the valve% until you like what you hear. It's the equivalent of having Eq, compressors, a limiter and an enhancer all in one easy interface.

If you want big bass, then Mixsat will deliver - can make weedy basslines sound full and thick or just add that extra little sub - to my ears better used in the mixing stage rather than clamped over a full mix, but some people will like that effect too.

It really is a studio essential - useable in channel recording or mixing stage, group mixing or mastering. It doesn't hog too much CPU (I get around 10% or under with all features turned on - Athlon1.1GHz, 512Meg RAM) Which considering the great effect it gives is very good.

Presets - comes with a useful set. From preamps to drumloops, to digitalising to valving to mastering, and bassifying or sparklifying. Not too overdone mostly as some plugin presets tend to do. You could actually make do with presets only and never have to tweak it?

Interface - it's very obvious what's going on - no rocket science needed at all. No manual needed.

VFM - alot depends on the kind of sound you personally like. I feel it's one of the best valve sims out there and I consider it much better value than enhancers. To get an equivalent sound you would need a good Eq, an enhancer and a good comp or limiter (not that you shouldn't have those anyway!). Some people may not like its sound - it certainly adds its own character and plenty of it, so in some ears it actually ruin their sound.

One small reservation - it does tape saturation sim also. If you like this effect, you might need to check out the competition - Personally I find T-Racks does a better Tapesat, as does Endorphin, but that's not why I have Mixsat - it's the valve sim that shines. But its tapesat is still very useable.Read more

Tape Cassette
Rated 4 out of 5 by gwenmollo
22nd May