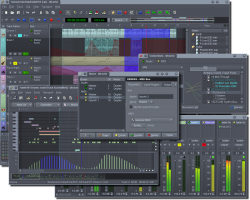 Qtractor by rncbc.org is a Virtual Instrument Audio Plugin and an Audio Plugin Host and a Standalone Application for Linux. It functions as a DSSI Plugin, a LADSPA Plugin and a Standalone Application. It can host VST Plugins, VST 3 Plugins, DSSI Plugins, LADSPA Plugins, LV2 Plugins and CLAP Plugins.
Product
Version
0.9.31
Tags
Tags:Sequencer / MultitrackALSAJackQtractorrncbcrncbcorg
Can Host
Instruments
Can Host
Effects
Other
Stand-Alone Utility / Application
Sample Formats
Loads and/or Saves
AIFF, FLAC, MP3, OGG, WAV
Copy Protection
None
Open Source
GPL
My KVR - Groups, Versions, & More
20 KVR members have added Qtractor to 8 My KVR groups 22 times.
Not In Your MY KVR Groups
(or group limitation prevents versioning)
9 0 Favorites
6 0 I Own This
2 0 I Want This
1 0 My Actual Studio
+4 in private groups

qtractor has nothing to do with agriculture - Qt is the name of the toolkit Rui has used to create his DAW that you can use to create your 'tracs' - hence qtractor!

I'm not going to go over qtractors many features as they're all listed on its homepage. You just need to know that its a reasonably mature, GPL licensed MIDI and audio sequencer for Linux and you really should try it soon if you haven't done so already because its an absolute joy to use!

When it comes to Linux DAWs, for a number of years now qtractor has been the only serious alternative to Ardour. However, qtractor is primarily a MIDI sequencer that also handles audio where as Ardour, as of August 2012, is still yet to make a stable release that includes MIDI sequencing support.

It is important to note that qtractor has a different target market to Ardour. Ardour is aimed directly at high-end, pro-audio users who may otherwise be using non-free solutions like Pro Tools whereas qtractor is aimed more at hobbyist and bedroom/garage studios - well at the moment anyway. Ardour has long been available for OS X as well as Linux but qtractor is proudly Linux only and as a result is one of the very best Linux only apps, not just in audio, available.

qtractor is currently at 0.5.5 which I'd say is quite modest considering what it is already capable of. If Rui continues developing qtractor at the pace he has been over the last several years then when 1.0.0 does get released I have no doubts it will give some of the big name DAWS a good run for their money and will be incomparably better than whatever they released as a 1.0 in most cases as qtractor is obviously very well coded. Outside of running dodgy plugins - I'm not sure I've ever seen qtractor crash and its binary comes in at less than 1MB which explains why it runs sooo fast even on older hardware.

qtractor has often been the first app to adopt new Linux audio technologies such as LV2 with its many updates and extensions. Whilst I was doing lots of testing for Ardour 3 I would frequently use qtractor as a reference. Whilst Ardour, not only because it has a few full time devs working on it and has also been around almost twice as long as qtractor, offers more high end features for audio work than qtractor currently does, I have found qtractor to be much more stable with notably fewer quirks. Rui is always very responsive and intolerant of bugs in his apps.

It is only in the last year or so that qtractor has finally gained some much requested and long awaited automation support for both audio and MIDI tracks. Whilst this works well enough, its not feature complete right now as you can't copy and paste either segments of or whole automation parts yet. My other most wanted feature before I think qtractor is seriously ready for world domination is the ability to create tempo ramps - when qtractor can do both these I'll be made up! qtractors biggest problem is that it is developed purely as a hobby by Rui and that there is no other major contributor to its development so progress in respect to major new features is slow.

AV Linux 6 has just been released so if nothing I've said has put you off I would highly recommend you download that distro (if you're not running Linux already), get it installed and give qtractor a try - I'm sure you'll be glad you did!

To finish I'd like to thank Rui for this outstanding contribution to (Linux) music and audio software. qtractor is not only one of the very best Linux apps in any category, its one of the best apps wrote for Qt, its a reference for others trying to develop Linux audio software of all sorts and Rui's dedication, good humour and exemplary support for all of his apps is to be highly commended.

holy thanks for the kind review Dan :)

Hope you've had a good holiday - if you're back now that is?

I was pleasantly surprised to see qtractor coming in at #1 in the Ranks and Ratings charts for free hosts in the last 7 days when I just looked now which is also how I just spotted your comment!

even more thankful to you Dan

your review rating 10 might have something to do with it, i suppose :)

Realizing that a 10 rating is a friendly, but fictional and honorary perfection, qtractor is a fine achievement, and getting lots of improvements (the author has also released new instruments as well!). Linux as a DAW is very enjoyable, and easily acquired.

and quite a few others, have taken the configuration learning curve to new minimums,

and windows plugins are very usable, qtractor output can be easily summed with reaper,

Those not subdued by piles of cash, might well get excellent performance using last-years computer,

in a fast RT linux, and discover some fine new software along the way. Yoshimi, rakarrack, and hydrogen,

and linux sampler, are getting updates, and make a solid core for composing using keys and guitars.

Burn a linux .iso to cd/DVD, or use unetbootin to easily install one on a usbstick. Reboot using early-boot menu

to avoid starting up your hard-disk windows gear.

most comments one reads in the interwebs about linux audio & music have been superficially negative, more over when comparing to the big non-free, closed-source, proprietary systems.

in that regard, yours is positively awesome and brave ;)

the best, thanks for this great sequencer.