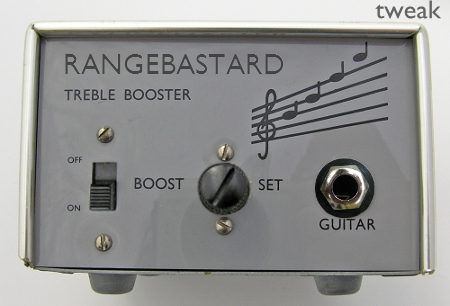 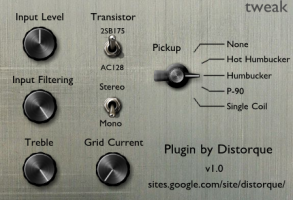 Rangebastard is an emulation of a Dallas Rangemaster. It has added controls for tweaking or for use as a full-range booster, an overdrive, and more. All parts of the circuit are emulated, from the input filtering, to the interaction with guitar pickups, to the germanium transistor, and to the front-end distortion of a tube amp.

The Rangemaster was a germanium transistor treble boost developed in the 1960s. It and similar effects have been used by Eric Clapton, Brian May, and many more great guitarists. It's most often used to drive a distorted tube amp into more distortion, while boosting the upper-mids for a screaming lead sound.

This is an excellent antique-style mid-range exciter, or when you're feeling abusive, great for mangling mid-range noise.

I'm not going to say it isn't harsh, because harsh is kind of the point, but it's not a gritty digital harshness; I don't find myself gnashing teeth like with many digital distortions on complex content in this frequency range. It's more of the grit I'm looking for. It does full-range content pretty well, but it shines on retro leads.

The comprehensive options under the hood make it my go to for this type of tool.