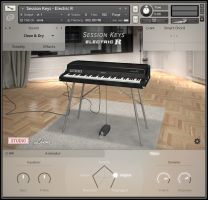 SessionKeys Electric R is based on a vintage 1976 Rhodes Mark I Stage Piano, specially modified with eight individual outputs to capture every nuance of its classic sound.

In addition to recording line out signals, an extensive microphone setup was used to capture the pure, unaltered acoustic sound of the instrument. The result brings the true Stage Piano feel to life and delivers an exquisitely detailed tone with supreme depth and flexibility.

Session Keys Electric R features two different electric piano characters: Studio and Live. Studio was recorded directly through high-end pre-amps and A/D converters, reproducing the piano's clear, bell-like character popular amongst some of the best jazz and pop artists in the world. Live uses classic vintage outboard equipment and pre-amps for an edgier, rougher version of the instrument. The Rhodes' distinct mid range is designed to sit well even in very dense arrangements.

Session Keys Electric R also delivers creative sound design possibilities that go far beyond the instrument's original capabilities. The Pentamorph controller can give the classic Rhodes piano a new complex sound in a matter of seconds.

The powerful effect and scripting engine allows users to tweak virtually every element of the Rhodes sound, even down to the distance between tines and pick-ups. On the real Instrument this is done with the laborious adjustment of a large number of individual screws – on Session Keys Electric R it's just a single control.

The Animator boasts over 200 ready to play licks and phrases in different genres and styles. Animator is much more than a simple phrase player, it follows keys and harmonies while providing complete control over a phrase's dynamics and complexity using the pitch bend and mod wheels.

The effect chain features classic electric piano effects such as Tremolo, Chorus, Amp Simulation, Delay, and Reverb. Additional parameters for more creative sound design can be used to turn a Tremolo into a stutter-like modulation effect or to sync Auto Pan and Delay to musical tempo.

Designed for creative workflow, Session Keys Electric R the perfect choice for any production from jazz to funk, soul to pop...and beyond.