ShapeShifter by Progress Audio is a Virtual Effect Audio Plugin for Windows. It functions as a VST Plugin. 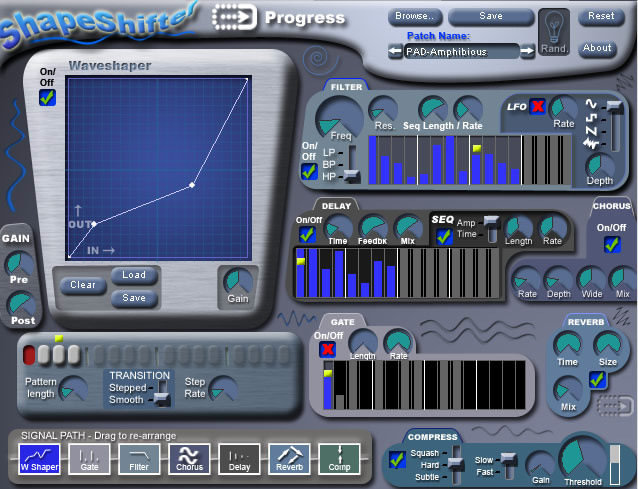 ShapeShifter is a multi-effect plug-in which gives you a number of tools for changing your audio, from subtle effects to extreme mangling.

The following effects modules are included:

The signal path is configurable so that the effects can be ordered any way you like for maximum flexibility.

User Interface - It's colorful, and it's layed out well, your graphic arts tastes/opinions may very, but you can't hardly argue that it's good/usable overall. I gave it a 7, rounded down from 7.5, it's not really my favorite look, but it's very functional, and pretty easy on the eyes.

Sound - This one has the filter, it's musical in a way that I can only imagine is people talk about when they say "liquid". I have little experience with analog synths, very little really, an old Juno 106 and something else a few years back, but their filters didn't hold a light to this one. You simply have to hear it yourself. What didn't I like ? The waveshaper can get really harsh really fast. And the reverb while good, has a bit much of it's own "character" to be used all that much. Other than that, it sounds as good or better than you'd expect, and the chorus is actually pretty usable/good. It gets a 9 here, the reverb is a little less than generically useful, but it's good the chrous is usable, which is rare of ya ask me, and the filter pwnz.

Features - It's feature packed, this one is a programmers dream come true. With the version 1.2 update, you can re-order all the effects, yes, all of them, any order, drag-n-drop easy. The features are pretty much what you'd expect in a multifx, other than the re-ordering capability I don't see much to comment on, expect to say it is full featured. I'm rounding up to a 9 here, because you can re-order the effects chain, beat that if you can.

Documentation - Ugh, the manual question, lemme look. A 5 page .pdf is included, with some pictures and directions. It's a bit skimpy, but if you know what the effects do individually, then getting them all going together is just something you learn kind of intuitively anyways. The manual could be better, but it's acceptable for anyone but a newbie. I'll round up to a 7 here, since I already know what a waveshaper does, and even if someone doesn't, it ain't rocket science.

Presets - Quite a few presets, probably close to a hundred all total. I didn't find al that many of them useful personally, but do I ever ? You get a variety, and if nothing else, they'll get you halfway to the sound you want, and help you learn to use the plug-in along the way. I'll round up again and go 8 here, while they weren't all my cup of tea, they had quite a variety and were interesting sounding at least.

Customer Support - Haven't used/needed it myself since I tried to run the demo on a Pc with Win98. Alex is around on K-v-R though, so I doubt he's hard he's hard to find or get ahold of. We'll go with 8, cause I've seen Alex on K-v-R at least once every 2 weeks all through 2006, he's available.

Value For Money - This one is very reasonably priced. You could pretty much pay this much ($60) or more, for just the filter on this unit. I'd have to give this extremely high marks for value, much like almost any good multifx, they are usually a bargain if they have good components. I'd say 8.75, but K-v-R hates decimals, so let's just make it 9, and consider it earned with the addition of the compressor in v1.2

Stability - very stable for me on a Pc with WinXP. The cpu usage varies a little bit, with longer delay times, you can get it up pretty high, but how often do you use a really long delay, and doesn't every long delay do that too ? I'm gonna give it another 9 here, for Pc's with WinXP, I can't comment on Mac stability, sorry.

Final Notes - O.k., so it's a multi-fx, it's got bright colors, it maybe isn't thrilling you all that much right. Here's 2 reasons why it should. 1) The filter. You won't get it til you hear it, then, assuming you have ears, you will. 2) It doesn't have numerical readouts. Why is this a standout feature ? Because it causes you to use it differently, more musically if I dare say so. You have no choice, you have to just turn the knobs and move the sliders etc., until it sounds good. For the asking price, and the feature set, you will have to search high and low to beat it, I can firmly recommend this one to anyone looking for a musical multi-fx.Read more

Granite
Rated 5 out of 5 by rofilm
9th August

Granite
Rated 5 out of 5 by rofilm
9th August

MegaHertz
Rated 5 out of 5 by SimonRose
8th August

Serenity
Rated 5 out of 5 by SumnSumnSumn
5th August

AI MASTER
Rated 5 out of 5 by ztakram
5th August

Falcon
Rated 5 out of 5 by zisser
5th August

Model D
Rated 5 out of 5 by zisser
5th August