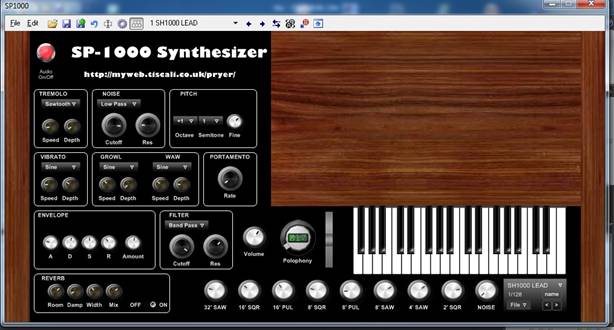 The SP-1000 virtual synth pays homage to the Roland SH-1000 synth first sold in 1973 and which was Roland's first synth. Its successor was the SH-2000, but that was designed to be more of a preset instrument with far less flexibility.

The SH-1000 was used by Blondie, The Band, Jethrow Tull, The Human League and Eddie Johnson (Roxy Music) as well as many others.

This was also the first synth I owned.

I have been a KVR member since it's early days and i have never been inspired to write a review on a plugin until i bought the SP1000 from Stuart Pryer and i have got to say that i did not want to write this review because i wanted this synth to be my secret weapon as a source for bass after i tried the demo version, my word! for bass this synth is LETHAL!!!!! it has raw powerful oscillators and filter with character, with a little tweaking my basslines are now like an axe chopping through the mix as opposed to hollow, sterile bass sounds that i was getting from other vst's, if the SP1000 can deliver good basses i am sure that it is also capable of some good strong leads as well, Stuart Pryer and his SP1000 creation has taught me a valuable lesson in VST analogue emulation that i will cherish for the rest of my life, thank you very much Stuart.

Pros: - For such a high quality and well coded VST (Very low CPU consumption) this is £20 well spent, a very solid investment, i love the vintage GUI, i use this for bass only so if you are looking for a bass solution to up your game, buy this VST and spend a little time (Like i did) tweaking the oscillators and adjusting the filter to your taste, learn this VST and you have bass for life.

Cons: - The only con (If you are fussy) is that it is 32-bit only, at the end of the day it' all about the sound and for me this VST plugin delivers proper bass! you can use jbridge if your DAW setup is 64-bit, i use Reaper which has it's own 32-bit bridging, there are no other cons.

As i have mentioned before, i did not want to share this information but the bottom line is i have a conscience, we are on this planet to help each other and i hope that this review will help you in the low frequency department on your musical journey.

Phrasebox
Rated 5 out of 5 by csanders00
27th January