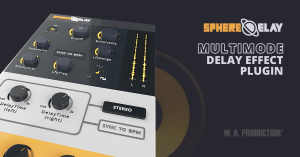 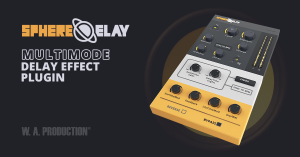 SphereDelay by W. A. Production is a Virtual Effect Audio Plugin for macOS and Windows. It functions as a VST Plugin, an Audio Units Plugin, a VST 3 Plugin and an AAX Plugin.
Product
Version
1.5
System Requirements
Windows 7 or higher (32 / 64-bit)
Product
Version
1.5
System Requirements
Mac OS X 10.5 or higher (32 / 64-bit)
Tags
Tags:DelayCreative DelayDelay / EchoExperimental DelaySphereDelayW A Production
Effect
Formats
Spheredelay Preview 2
My KVR - Groups, Versions, & More
29 KVR members have added SphereDelay to 4 My KVR groups 33 times.
Not In Your MY KVR Groups
(or group limitation prevents versioning)
24 0 I Own This
4 0 Favorites
4 0 My Actual Studio
+1 in private groups

SphereDelay is an innovative Multimode Delay Effect Plugin. We developed this plugin for the producers around the world who want something more when it comes to effects. The basic plugins that give the same Delay presets that we all know and are familiar with, whether it be DAW stock Delay plugins or third party Delay plugins that just aren't enough. We wanted to add something new to the table. We believe that Beginner and Experienced producers will enjoy the sleek and easy workflow of SphereDelay as well as the pure customization of your Delay sound. We believe SphereDelay would give you a totally new depth experience, with a wide variety of customization features that makes the sounds it provides unique and limitless.

SphereDelay comes with a variety of different effect modules like;

- Saturation – Analog Tape Style Saturation, to get the warm classic sound of a real Tape Delay.

- Envelope Follower - to modulate the filter cutoff and the delay time.

- LFO – with variable waveforms to modulate the filter cutoff and the delay time.

- BPM Sync – The delay time and the LFO frequency can be synced to your project tempo to create rhythmic effects.

All of these effects tie together to create amazing Delay effects that will really spice up your instruments and will give new depth and dimensions to your mix. SphereDelay comes with an extremely sleek design with an interface that really pops out and makes navigation easy and fast. The idea behind SphereDelay was to allow users to really get into customizing their Delay effects. We understand Delay can be an important part of a track in certain parts, or in general as an effect. So, we felt like creating a Plugin like SphereDelay was a big move in the Effect Plugins world. Allowing for this amount of personal customization in an effect like Delay can allow its users to create a game changing track with a personalized and amazing sound.

We strived to make SphereDelay appeal to all levels of producers. We know how picky Professional Producers can be when it comes to finding plugins and sticking to them. A lot of the time you see Pros using the same things because it is a sound they know and their fans recognize and love. However, we know and have the confidence that we can change the minds of the Professionals and bring them to our side when they get their hands on SphereDelay. They will be in love with the fact that they can use the sound that they loved to begin with, as well as create amazing variations of that Delay and many other amazing effects.

SphereDelay comes with 4 different Delay Modes that each have their own way of shaping and effecting the Delay signal. The 4 modes are; Mono, Stereo, Ping Pong and Ping Pong Separate. In Mono mode the delayed signal is sent to both output at the same level making it heard from the middle of the stereo image (right between your speakers). In Stereo mode the signal is split to left and right and each side have its own delay time knob (the Feedback of the left goes back to the left and the Feedback of the right goes back to the right).

In Ping-Pong mode the delayed signal is sent first to the left, delayed again (by same time interval) and goes to the right (the Feedback then goes back to the left and continue bouncing from side to side).

Ping-Pong Separate mode is similar to Ping-Pong mode only here there is separate time knob for the delay in each side (making it bounce from side to side with a time offset).

SphereDelay has Delay Time Modulation and in each delay mode, the delay time can be modulated with the LFO and the Envelope follower to create a variety of special effects. This tool is really great because it allows for even more customization to your delay effect. We believe this is an amazing step up to just regular Delay effects, the fact that you can literally change anything in the Delay spectrum and signal is a game changer.

SphereDelay as we mentioned comes with MANY different features, another example of this is the Reverse feature. In each Delay mode, the input can be Reversed. The feedback signal however is NOT reversed in order to keep its state. This Reverse can be a great tool to user on certain instruments/ audio samples, or in certain areas of a track as some sort of effect technique. To sum it up in the simplest way, the Reverse tool reverses the entire Delay signal to bring a unique sound.

SphereDelay along with its many effect features comes with a Stereo Filter. A 24db/ OCT, variable state, stereo linked, self oscillating filter with Saturation, LFO and Envelope Follower modulation. With this, you can tweak little things in your delay effect signal to get the correct tone that suits whatever you need it for. As mentioned before, we wanted to implement a tone of features like this to allow you to customize your sound the fullest extent.

The presets of SphereDelay are really amazing. We know as a company that focuses on Sample Pack creation primarily that sometimes you guys don't know how to create crazy amazing effects, especially with a new plugin. So we have done that for you. We are providing presets like;

Just to name a few. We have incorporated 30 amazing presets with SphereDelay that are all amazing and unique. So if you ever need a quick delay effect but don't know how to make it and or just don't feel like spending the time to create an awesome delay effect, then you can choose between 30 great presets.