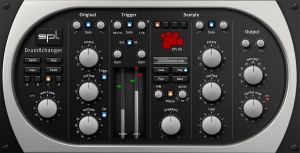 Another kind of drum replacement: simple and safe.

The name of the DrumXchanger is self-explanatory: it replaces drum sounds. But when it comes to processing it relies on a unique approach: it uses the Transient Designer technology for sound recognition. That way the DrumXchanger can faithfully recognize even the faintest ghost notes — regardless of their dynamic level.

To clearly understand the DrumXchanger's true potential it is important to understand that it is not merely a sound replacer. It is, in fact, a powerful tool to optimize drums tracks. The processing possibilities to improve and shape sound — without the need to replace any sounds — are almost limitless, while the actual sound replacement itself can be done gradually (0 to 100 percent) in order to mix both the original and the sampled sound.

If the DrumXchanger stands out due to its extremely reliable sound recognition, its simplicity is nothing but surprising. The principle behind the DrumXchanger concept was to focus on the essentials: the snare, the toms and the bass drum.

All functions are clearly displayed and processing is done at the highest standards of precision and quality. When you need to create a quality sounding snare from a more than dubious drum sound in a matter of seconds, the DrumXchanger offers lots of possibilities.

Sound replacement technologies are usually based on level recognition, so you can only set the threshold for a given level. This results in softer sounds not being recognized due to the fact that, with a threshold set too low, other instruments mask the drum sounds, making an accurate recognition impossible.

On the DrumXchanger you can set two different thresholds for a more accurate recognition of drum hits: a level threshold and a transient threshold. The sample plays back as soon as both of these values are reached. Simple operation — sound recognition.