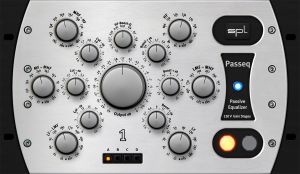 The original Passeq hardware is the first passive EQ which provides three separate frequency ranges for both boost and cut stages.

...One famous, if not the most famous, passive design was the Pulteq EQ from the decades of the 1950's and 60's. This EQ sported two frequency bands (low and high frequencies, or LF and HF), and had only a few switchable frequencies to offer. In contrast, the Passeq has 12 switchable frequencies per band, totaling 36 boost and 36 cut frequencies. Boost and cut frequencies are NOT identical, thus the resultant 72 frequencies per channel offer an enormous choice for the most elaborate EQ curves. The Passeq offers for the first time passive filter control possibilities extending throughout the relevant audio frequency range—and that with an unheard of abundance of filter choices.

The fantastic qualities of SPL's Analog Code programming faithfully reproduce the unique sound quality of the original hardware. All the complex interactions between each single filter are reproduced in every detail. One of the peculiarities of passive filter designs is that they can be seen as one big filter — the signal always runs through the whole network. Whenever the settings change, a flow of interactions takes place between the filters, providing the characteristic and unique sound of these EQs — something that will never happen with active EQ designs.

The plug-in list of your host program will show two entries after installation: "Passeq" and "Passeq Single." Aside from the standard dual-channel GUI, the single GUI represents a space saving alternative showing one Passeq channel. Nevertheless, the single version can be applied to a stereo track – you simply control both channels simultaneously with one knob.

As an alternative to L/R encoded stereo signals, there is one technique that is particularly useful for signal processing during production: M/S. "M" stands for Middle (or Mid) and "S" for Side, which means that signals are separated from the middle to the sides, instead of from left to right.

The use of a mid (M) and a side (S) signal instead of the usual L/R signal results in a much wiser musical processing. High-energy Mid signals (vocals, snare, bass guitars, etc.) can be easily separated from Side signals (guitars, keyboards, cymbals, etc.). When processing sum signals, M/S encoding is often the best option to be able to target single elements within a mix.

Initially one might be struck by the circular arrangement of the Passeq's control elements. As unusual as this first appears, the more understandable and clearer this layout becomes when one looks closer.

Along with the fact that we simply like this design from an aesthetical view, this layout makes even more sense with respect to the idea of the passive EQ concept itself: In a passive design, filters for boosting and cutting a frequency range are physically separated from each other. Reflecting this fact, the elements left of the central output control perform level cuts, while controls to the right of this central regulator serve as signal boost controls. Cut and boost switches are positioned next to the appropriate frequency band selector and frequency bands are arranged from low to high from the standpoint of both physical and frequency range layout—all in all a clear overall functional picture though without much in the way of boring routine.

One of the greatest Passeq design challenges was in determining the choice of frequencies, which in contrast to parametric EQ designs, are fixed or nonadjustable. One could accept standardized values from such as the so-called ISO frequencies, but such measurements stem too much either from conventional measurement standards or those from room corrections rather than choices of what may be musically more sensible. In assigning the Passeq's frequencies it was inevitable that we would rely on the nearly 30 years of experience of SPL's chief developer, audio engineer and musician, Wolfgang Neumann.

To enhance further our achieving this musical objective many audio experts and musicians were consulted regarding their favored frequencies. Among the many, David Reitzas, Michael Wagener, Bob Ludwig, Ronald Prent and Peter Schmidt offered valuable advice. From this point of departure we managed to determine that there is definite agreement among professionals about their preferred musical frequencies, and these differ clearly from the standard ISO choices.

The results also showed that the closely meshed boost and cut frequencies are important and sensible. Through them one can on the one hand focus more precisely on a certain frequency, and on the other, offer the option of influencing the Q factor (which is typically rather small in passive designs) by creating so-called S curves. An Example: Assume you wish to boost in the mids around 320 Hz, an instrument or voice level while at the same time avoiding a boost to the frequency range below it due to the small Q factor (high bandwidth) of the filter, and perhaps even lower it. In this case, let's say you choose the LMF-MHF boost band and increase the chosen (320 Hz) frequency range by about 3 dB. At the same time, you chose a 4 dB reduction in the LF-LMF cut band. The close proximity of the chosen frequencies allows you achieve an increase in the slope between the two. This is "S slope EQ-ing" at its best, and in this discipline, the Passeq is a world champion in both options and results.

The "Settings" feature allows to store four different sets of adjustments. Much faster than with the usual save and recall presets dialogs, the settings can be stored and recalled by just one click. The Settings A, B, C, D can be included into the automation of host applications to apply different sets of parameters to different parts of a song.

All SPL Analog Code plug-ins support mouse wheel control for rotary controls and faders. Place the mouse cursor over a rotary control or fader and move the wheel or scroll ball of your mouse to adjust the control or fader. Hold the CTRL (Windows) or APPLE/COMMAND key while moving the wheel or scroll ball for fine adjustments with higher control resolution.

While SPL hardware products have been fascinating audio professionals from home studio owners to mastering engineers in the world's most renowned facilities for years, the need for this technology in the form of plug-ins has also been an ever-growing demand. With the Analog Code plug-ins we have finally accomplished our much desired goal: to transfer to the digital domain the high quality we have striven to achieve with our analog processors throughout several decades.