Login / Register
My KVR0Updates
00 items | $0.00 CHECKOUT New
Plug-in Developer?
Search
Who are we in the KVR community in 2020?VOTE NOW
SuperDrumsby

BUYING! X Checkout $7.50Buy Now!
SuperDrums by Rhythmic Robot is Soundware (e.g. samples or presets that load into other products). 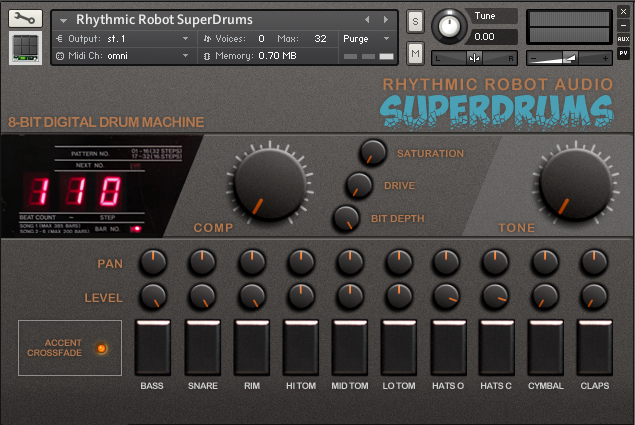 Plug-in, App & Soundware Format(s)
Operating System Availability
Miscellaneous Information
Important Note
Requires a FULL version of Native Instruments Kontakt version 4.2.3 or higher (all versions of Kontakt 5 supported). Kontakt Player is NOT recommended and will time out after 15 mins or so. PLEASE MAKE SURE YOU HAVE A FULL VERSION OF KONTAKT BEFORE BUYING, AS WE CAN'T GIVE REFUNDS FOR SOFTWARE BOUGHT IN ERROR!
Max. 6 items
Latest Version Changes [view all]
Any OS Version
1.0

Rhythmic Robot SuperDrums is a Kontakt recreation of Korg's first digital drum machine, the 8-bit sampled SuperDrum DDM-110. The DDM-110 was a small but powerful, easily programmable machine with a surprisingly sophisticated editing system for its time, and its sounds – while not exactly naturalistic – were punchy and thick. The 8-bit, limited bandwidth sampling lends its tones a crunchy warmth that sits very well in electro and house styles, though it can work well in any contemporary track. It had nine onboard kit pieces, with an Accent control for extra variation. Notable among its onboard sounds are the kick, snare and claps, all of which stand up well nearly thirty years after the machine's release.

SuperDrums samples the original DDM-110's kit pieces in both Accented and unAccented variants, and allows the user to select either a hard swap between these tones or a crossfaded, graded transition from one to the other. A gentle low-pass filter with a 6db/octave roll-off allows the upper frequencies to be toned down, while an output limiter, saturation control and drive distortion allow the sounds to be roughed up beyond their already gritty 8-bit origins.

SuperDrums is an ideal way to capture some of the spirit of the very first digital drum machines in a simple-to-use, authentic-sounding Kontakt package.

SuperDrums is available now from Rhythmic Robot and requires Kontakt version 4.2.3 or higher (including Kontakt 5).