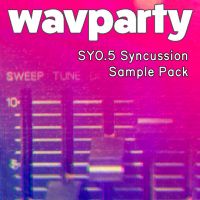 The Wavparty SY0.5 Syncussion sample pack features analog drum and synth sounds from the Michigan Synth Works SY0.5, a modern Eurorack clone of the Pearl Syncussion drum synth from the 70s. The Syncussion became a cult hit with electronic producers thanks to its wide sonic palette and ability to create sonic weirdness. Used prices skyrocketed in 2014 when the Syro gear list revealed that Aphex Twin has 4 of them racked up.

This pack includes some clean sounds and some sounds that have been heavily processed with other Eurorack gear.

Audio files included at both 24-bit, 48kHz WAV and 16-bit, 44.1kHz WAV, perfect for dropping into most samplers.