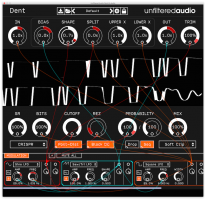 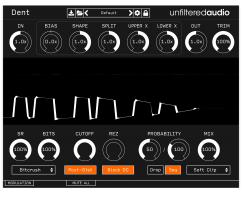 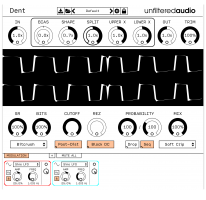 Unfiltered Audio Dent by Plugin Alliance / Unfiltered Audio is a Virtual Effect Audio Plugin for macOS and Windows. It functions as a VST Plugin, an Audio Units Plugin, a VST 3 Plugin and an AAX Plugin.
Product
Version
2.4.0
System Requirements
Supported Operating Systems
Windows 7 through 10
Pro Tools 10 or higher or any VST/VST3/AU-compatible host running on a supported operating system

Dent is a radical distortion plugin with sinister intent. You won't find any sweet-sounding tube and tape emulators here! Great for both music production and cinematic sound design, Dent mutilates sounds at the wave cycle level for a twisted makeover.

Six crippling bitcrushers, a sampling-rate mauler and signal clippers are just the tip of Dent's destructive iceberg. Slash the amplitude of just the negative phase of your clean electric guitar's signal, use the Shape control to square the signal tops, and jack up the harmonic content with special wavefold processing to launch the track into Beatles "Revolution"-style overload. Not mangled enough? Tune Dent's Probability control to emulate failing guitar-amp tubes. Or create outrageously rhythmic distortion effects with Dent's internal sequencer.

But Dent can get even more hardcore if you want. Invert the negative phase of a comping piano on most but not all of the signal's wave cycles, plunge the built-in lowpass filter's cutoff and boost resonance to make the keys sound like howitzers detonating in the distance. Four simple control tweaks get the job done in seconds.

Six freely assignable modulators can be patched to most of Dent's controls. Use LFOs to produce conventional stereo wah wah or to transform heavy distortion processing into auto-panned DJ-scratching effects. Modulate DC offset with an input follower to make a snare drum track with hi hat bleed sound like heavy machinery pounding away in a demonic assembly line.

With Dent, adding interesting harmonic content to any sound is child's play, mangling tracks beyond recognition can be done with the twist of a few knobs, and reducing a full symphony of digital audio to ones and zeroes is only limited by how many patch cables you can keep track of! The results are new and exciting sounds that keep your productions sounding fresh and contemporary.

Sometimes you need sonic damage to push your track over the top. Don't just distort it. Dent it.

Activate the fully functional 14-day demo with your Plugin Alliance account today to hear for yourself (no dongle required).

Continuously variable Bias and Split controls progressively add DC signal to one or both phases of the input signal.

Add attitude to vocals with input gain, square up bass tracks with the Shaper, obliterate samples with the Bits and Sample Rate reducers, and run it all through a screaming low-pass filter.