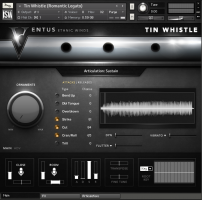 Ventus Ethnic Winds: Tin Whistle by Impact Soundworks is Soundware (samples or presets that load into other products).
Product
Version
1.0
System Requirements
FULL VERSION (not player) of Kontakt version 5.3.1 or higher
6GB disk space
2GB RAM (4GB recommended)
2008 or later processor. Your system must also meet the requirements for version 5.3.1 of Kontakt. If you cannot run that version, you will not be able to load this library.

The Ventus Tin Whistle uses the same script interface as other instruments in the Ventus series for consistency and ease of use.

The Ventus Tin Whistle is available now for the list price of $99. Owners of Ventus Shakuhachi can instantly save $20 in the ISW Deals section.