Vikings: Cinematic Hybrid Punk Folk by Keepforest is Soundware (e.g. samples or presets that load into other products). 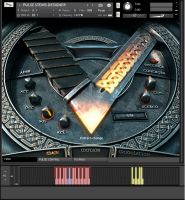 The mighty and massive sound of the Vikings Age

Vikings: Cinematic Hybrid Punk Folk is inspired by the Scandinavian world and mythology, which has always played an important role in today's movie industry. The specific Vikings-vibe can be heard for example in Guy Ritchie's masterpiece King Arthur or in the extremely successful Game of Thrones television series.

Surprisingly, until now, there was no true and complete library on the market, dedicated to this genre. Having a clear vision in their minds, the team behind KeepForest decided take the opportunity and started the recording process of Vikings in January, 2017. With the participation of professional musicians, sound designers and sound engineers they recorded strings, percussions, guitars, basses and literally played and experimented in the world of sounds, creating the library's uniqueness and signature.

The library guarantees to bring the instant mighty and massive sounds of the Viking Age to your composition by offering a huge number of organic sound design elements like rolls, hits, braams, benders, punches, trailers hit kits and more to explore.

The main features of the Vikings library are the ingenious exclusive pulse designer, the great and intuitive GUI, the powerful and versatile effect rack and a massive collection of customizable stems and pulses which will spice up your composition immediately.

My KVR - Version Control & Lists
Not In Your MY KVR Groups
(or group limitation prevents versioning)
1 person has added Vikings: Cinematic Hybrid Punk Folk to 1 My KVR group 1 time
1 0 I Own This