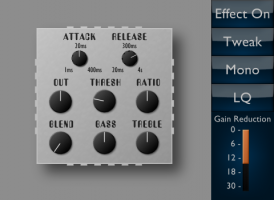 Vitamin C by Distorque is a Virtual Effect Audio Plugin for Windows. It functions as a VST Plugin.
Product
Version
1.0.1
Tags
Tags:CompressorCompressorsDistorqueDynamics (Compressor / Limiter)Vitamin C
Effect
Formats
My KVR - Groups, Versions, & More
28 KVR members have added Vitamin C to 11 My KVR groups 35 times.
Not In Your MY KVR Groups
(or group limitation prevents versioning)
14 0 I Own This
12 0 Favorites
1 0 My Actual Studio
+8 in private groups

Vitamin C is an emulation of an Orange Squeezer guitar compressor, with added controls for tweaking. It runs in mono or stereo, and has selectable 2x oversampling. Note that this is not a studio compressor, Vitamin C has the quirks and imperfections of the original Orange Squeezer that gave it its unique character.

The Orange Squeezer is a guitar compressor that was released in the 1970s as part of the Dan Armstrong effect line. It has been used prominently by artists like Mark Knopfler and Jeff Baxter for its smooth squish and sustain.