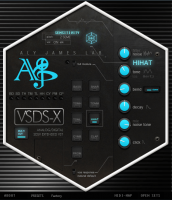 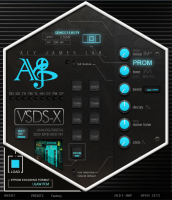 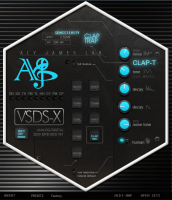 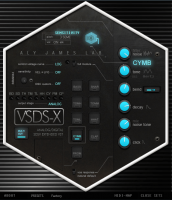 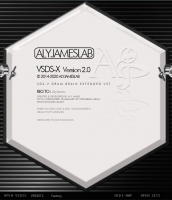 VSDSX SDSV DRUMS (Virtual Simmons Drum System Extended) is an authentic Simmons SDS-V drum synth recreated in plugin which emulates all the character and internal circuitry of the legendary 80s Analog Drum brain synthesizer with those famous hexagonal shaped pads. The Simmons SDS-V Drum Brain, invented by Dave Simmons in the early 80s, it also adds features from SDS7 and SDS1 and since version 2.0 an emulated Claptrap voice based on the Simmons Digital Claptrap. Highly velocity sensitive this is a drum synth, real-time sound generation and not sample based.

The Simmons drums were all over the place, on countless records and live shows during the 80s, used by artists and bands like Genesis, King Crimson, Jean Michel Jarre, Prince, Herbie Hancock, Pink Floyd, etc. The sound was not especially realistic but it was not the goal... the goal was to be huge and versatile. The most famous drum brain called the SDS-V or SDS5 was a drum synthesizer, bringing synthesis into the drummer hands. To this day the unique sound of that machine is highly regarded and only using samples of Simmons Drums cannot reproduce the wide range of sounds this machine can produce and especially the warm and punchy analog character. The whole circuitry stands next to the unique sample based characters of the hihat & cymbal in that unique sounding team.

The VSDSX, which stands for Virtual Simmons Drum System Extended, provides the closest experience to the real thing, for each voice or as it was called (module) it models accurately the analog character of the sound generation, internal circuitry tuning, trigger sensitivity and all the details you might expect. For its hybrid voices (HIHAT, CYMBAL, PROM and CLAP are analog but also EPROM based) clocks and counters reading EPROM memory inside a variable sample rate system are perfectly emulated. DAC decodes and output EPROMS data in real-time. It models the SSM2044 filters with fine tuning control over internal circuitry resistors. CV, trigger shapes, and VCA response can also be tuned to produce a wide range of sounds and punch/response, this also emulates how the module will react if triggered with pads or sequencer...
Separate outputs for your DAW, velocity handling etc...You will obtain that legendary powerful analog punch.
One voice can load your own external EPROM image data like on a real SDS1 pad(EPROM based). This opens up onto a whole new range of sound, still being processed by the circuitry.
VSDSX is now in version 2 and features among other cool things a perfectly emulated Simmons Digital ClapTrap module, a secret weapon which combines a variable sample rate digital source combined with a pitched analog noise, an original feature of the unit was to never produce the same sound twice. Although it is integrated inside VSDSX a dedicated plugin with stereo widening capability is provided as a bonus.

VSDSX provides a huge synthetic drum sound by itself and can also be used with great efficiency in drum layering. Parameters automation and modulation can turn this thing into a creative sound source

Runs on Windows/Mac 64-bit Systems and is compatible with 64-bit DAW/Host (VST2 and VST3 for Windows and AU(AudioUnits) for Mac).

Owners of VSDSX version 1.0 (windows only version) got an upgrade path from the VSDSX webpage.

Average user rating of 4.67 from 3 reviews
Read all reviews Add A Review

This is my favorite drum plugin. It has a fantastic sound quality equal to the original without the use of samples but with synthesis.The GUI is clean and the presets are good. That's how I mostly use it (just choosing a preset). Because its a plugin without samples its obvious smaller than a sample based and loads faster. The price is a steal in my opinion. And it just got updated to version 2.0.2. So dont hesitate.

This along with the VLINN from Aly James Lab make two of the most unique and incredibly detailed drum machine emulations on the market.

Like I mentioned in my VLINN review, I've now garbaged all my samples for Simmons drums. This is it. Some quick highlights:

Every perameter is editable and can be automated.

This thing can make HUGE 808 style kicks, or knocking little taps like a TR-606. The snares are surprisingly useful, and can stand on their own or be layered under other samples for depth. The toms are what the Simmons drums were all about and there is nothing to miss here. They are gigantic, and again - every piece of the sound you could conceive of is editable and customizable. The hi-hats were shockingly useful to me. They sound great if tweaked well. They have a realness to them, and sound like the Linndrum sample (which I believe they were originally cribbed from on the SDSV)

It has individual outs so mixing is super easy inside your DAW.

There are selectable levels of output which can really add the grit and definition of analog drums.

You can custom-load PROMS in it. So adding a clap or another snare, or whatever is easy. It then runs through the circuitry and comes out the other end sounding appropriately degraded.

Aly is on a roll with these plugins, and he's doing something NONE of the other developers are doing. Furthermore, he's doing it at 1/4 the price.

If you love the sound of the 80s. You need this kit.

If you have samples of a Simmons kit, throw them out and get this.

Although I was born in the 90s, the Simmons sound is something that quickly became a part of me. From old 80s rock bands to ambient drum noise for 80s cartoons, there's something that always stuck out to me about a Simmons. Upon realizing how much I loved the sound, and after finding out who made the drum (and that it had been discontinued), I began the VST and sample search. I first came across some drum samples, but of course the SDSV was one of the only ones the website owner wanted a donation for, and it was only for samples. Then I came across a freeware VST that was "SDS-V'-style" which I was grateful for at the time, but in the end I forgot about as well. It wasn't a complete emulation. My search ended and I sort of gave up on the idea for a while. Then, out of nowhere I see the most beautiful drum GUI in a post on KVR. Something about a "complete emulation" that can load old roms and everything. I listened to the sound demos and instantly that sound I remembered from childhood came back to me. I donated and am now enjoying the drums very much. I never thought I'd be using them with modern synth sounds, but they actually sound great together. Alone, the SDS-V can sound odd, but mixed with other instruments it is surprising how well it fits in, even with more modern sounds. I see myself using this in many songs to come. It sounds so much more real and different from stock drum samples. It has more life to it. And it brings back old memories at the same time. Well done.

Is there a demo available?